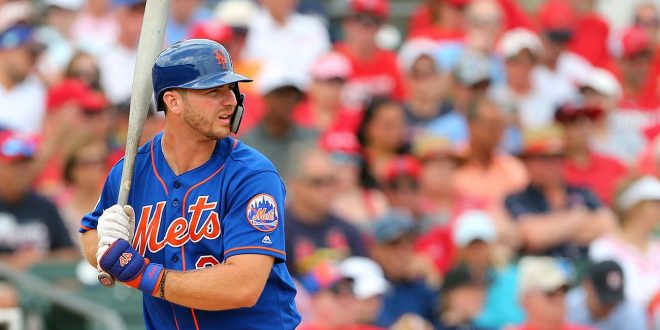 Former Gator Pete Alonso Coming Through for the Mets

In the Mets last game against the Braves, Alonso had one of his best games yet. The star rookie went 4-for-4 with two walks, three runs scored and drove in three runs in the first four-hit game of his career. Three of his four hits went for extra bases with two doubles and a two-run home run.

Prior to the game against the Braves, the Mets had lost the previous two games. Manager Mickey Callaway was determined for this game to be different though. Two and a half hours before first pitch yesterday, the Mets gathered in the SunTrust Park visiting clubhouse for a team meeting. However, this was not Callaway’s usual pep talk before games. This meeting was scheduled hours in advance and took players away from their normal pre-game routines.

What went on during the meeting is not completely known, but one thing is for sure, it worked. The Mets bounced back with a dominant 10-2 victory.

With this win under their belt, Alonso knows that they have what it takes for the series win.

The Mets 2016 second round draft pick is definitely paying off for them. Since being called up, Alonso holds a .274 average and a .359 on-base percentage. He also leads the team in home runs with 24 and RBI’s with 57. The next highest home run total on the team is 14.  He is only one hit behind the team leader Jeff McNeil who has 73.

The first baseman is only getting better with time as well. Over his last seven games, Alonso is averaging .462 with a .576 on-base percentage. He’s also brought in 11 on just 12 hits.

In April, Alonso was named the National League Rookie of the Month in only his first full month in the big leagues. He has also already started racking up more accomplishments. He became the first player in modern MLB history to have at least 11 extra-base hits in his first 10 career games. He also holds the Met’s rookie record for home runs before the All-Star break with 16 home runs by May 21st.