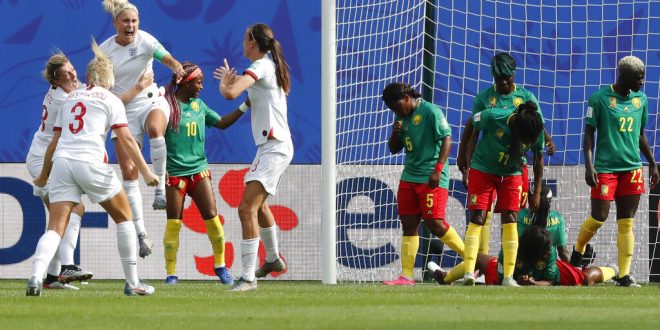 England's Steph Houghton, third from left, celebrates with teammates after scoring her side's first goal during the Women's World Cup round of 16 soccer match between England and Cameroon at the Stade du Hainaut stadium in Valenciennes, France, Sunday, June 23, 2019. (AP Photo/Michel Spingler)

As was expected, England got the better of Cameroon in their Round of 16 matchup. England won the game 3-0, but the scoreline flattered the Lionesses. As has been the case for much of the tournament, VAR played a major role in this game.

England’s first goal came in the 15th minute of play.

The referee ruled that Augustine Ejangue‘s touch back to the keeper was intentional. The indirect free kick was spotted six yards from the goal, and despite Cameroon’s wall of players on the line, Steph Houghton buried it into the side netting.

Ejangue’s touch back to her keeper looked nowhere near intentional. While England had a majority of the possession up to this point in the match, they hadn’t created any clear chances. This crucial call changed that.

England has made a habit starting games quickly this tournament.

England’s second came in added time just before the half. Ellen White received the ball from Lucy Bronze, who cut infield. She took a touch and coolly finished it with her left foot.

White has proven her scoring capabilities in this World Cup, scoring four goals in just three starts up top.

Shortly after the break, Ajara Nchout scored to cut the deficit in half. However, VAR ruled that she was offside in the build up to the goal.

The dimensions of the offside call were minuscule, coming down to what seems like an inch. This is not the right use of VAR. VAR was brought in to overrule clear and obvious errors.

The overruling of Cameroon’s goal was neither a clear nor an obvious error, and it ruined the momentum of the game.

Just about eight minutes after the crucial call to disallow Cameroon’s goal, England scored a third to seal the win. Toni Duggan swung the ball in low from a corner, and Alex Greenwood found herself wide open to bury England’s third and final goal of the match.

3-0! England are ruthless at the other end and add to their lead just minutes after Cameroon believed they cut it in half. #FIFAWWC pic.twitter.com/Y4wOo2D9cy

England held the majority of the ball, out-possessing Cameroon 63 to 37 percent. However, the shots were much closer. Cameroon had eight total shots to England’s seven. The Lionesses had more on target, with three compared to Cameroon’s two.

What’s Next for England?

England’s next test will come against Norway in the quarterfinals. Kickoff will be Thursday at 3 p.m.

Sports writer. Passionate about Premier League soccer, specifically Tottenham Hotspur.
@@JEricksonReport
Previous England Face Underdogs Cameroon in Round of 16
Next USWNT Faces Spain in Round of 16