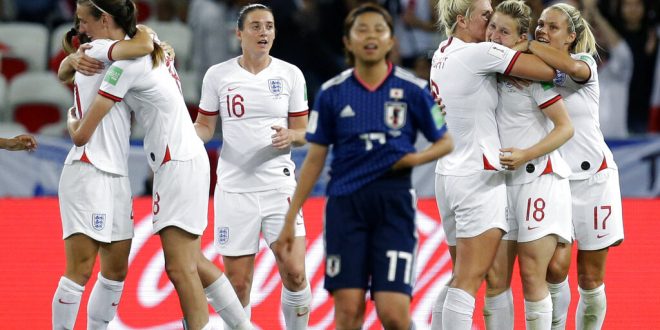 England Face Underdogs Cameroon in Round of 16

In the first phase of the knockout rounds, England’s Lionesses will face the Indomitable Lionesses of Cameroon. While their nickname may suggest one thing, Cameroon come into the clash as heavy underdogs.

Lucy Bronze, Steph Houghton and Jill Scott remain in the starting lineup for England. Cameroon move to a four-back formation.

The Lionesses topped Group D with an undefeated record by beating the likes of Japan, Scotland and Argentina. In those three games, England outscored their opponents five to one.

England comes into the knockout rounds with a fresh squad. Coach Phil Neville made sure to rotate his starting squads each game to make sure everyone remained fit and available for team selection going into the Round of 16.

Four of England’s five goals have come from their starting strikers, Ellen White or Jodie Taylor. The only goal to have been scored by another outfield player was Nikita Parris, who converted from a penalty.

One of the biggest issues for the Lionesses this tournament has been maintaining similar intensity levels throughout the match. While they’ve played well in the first half for the most part, in the second they’ve looked a different team. This was very much the case against Scotland and Japan.

Perhaps they are putting their foot off the gas, or they’re wearing down from the temperatures. Whatever the case, it’s allowed teams to rally later on in games.

Cameroon’s group stage was vastly different from that of England’s. The Indomitable Lionesses had to face Canada and the Netherlands in their first two matches, which resulted in two losses to start the competition.

On the final matchday, Cameroon faced New Zealand. Although the African nation was still considered to be the underdogs, New Zealand had underperformed thus far in the tournament.

Thanks to some brilliant solo efforts from Ajara Nchout, Cameroon won the match and qualified for the knockout rounds by finishing third in Group E.

Cameroon has a history of struggling against bigger teams. Alain Djeumfa sets up his team in a counter-attacking style, usually starting with five defenders at the back. While this worked very well against New Zealand, it hasn’t been as successful against the higher-ranked teams.

For example, in Group E, Cameroon lost to Canada 1-0 and the Netherlands 3-1. Canada played poorly on the day, which explains why they didn’t score more.

England and Cameroon will kick off in the Stade du Hainaut at 11:30 a.m. ET.