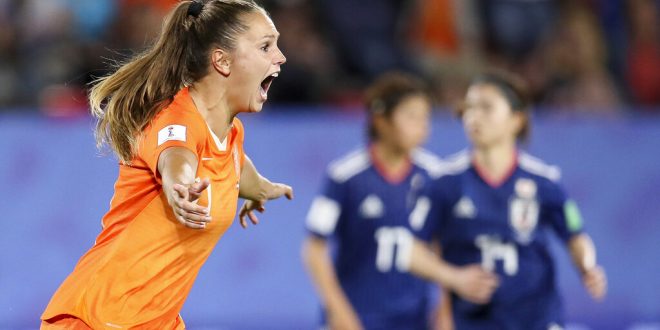 Netherlands' Lieke Martens celebrates after scoring her side's second goal from the penalty spot during the Women's World Cup round of 16 soccer match between the Netherlands and Japan at the Roazhon Park, in Rennes, France, Tuesday, June 25, 2019. (AP Photo/David Vincent)

The Netherlands and Japan faced off for a chance at a spot in the quarterfinals of the FIFA Women’s World Cup on Tuesday afternoon. Lieke Martens, who had largely been quiet for the Dutch, struck twice to help the Netherlands advance into the next round of play.

Here is how Japan and the Netherlands lined up at kickoff. Vivianne Miedema had two goals in three games for the Dutch. Meanwhile, Japan had a few different players with one goal.

The Dutch Take the Lead

The Netherlands took the lead off of a set piece. However, rather than coming from the air, it came via the heel of Martens.

The ball came in at the near post, where Martens stood unmarked. She flicked the ball off of her heel and through the defender’s legs to find the corner of the net and give her side the lead.

Minutes after the opener, Japan came inches within finding their first. After some terrific build-up play, Yuika Sugasawa found herself with a chance in front of goal. Unfortunately, she slid as she hit the ball, and it hit the outside of the post.

Almost the perfect response from Japan!

That's some wonderful link-up play from the Nadeshiko, but Sugasawa strikes the post. #FIFAWWC pic.twitter.com/ycjoOOdWIp

After some more standard Japanese build-up play, Mana Iwabuchi slid the ball in behind the Dutch defense to Yui Hasegawa, who made no mistake from eight yards out.

Japan had finally gotten its equalizer just minutes before the halftime interval.

Another lovely combination from Japan leads to a clinical Hasegawa finish, and it's 1-1. #FIFAWWC pic.twitter.com/5ngexRcKrq

Throughout the match, the Netherlands attempted long balls over the top of the Japanese defense. However, Japan’s No. 1 in goal, Ayaka Yamashita, did a terrific job reading the play and coming off of her line to limit the threat the Netherlands’ forwards possessed in such situations.

Yamashita has been very good about coming off of her line to gather the Dutch balls over the top. #NEDJPN #FIFAWWC

The second half turned into a midfield battle between the two sides. Neither had many clear opportunities until around the 75th minute, when the game opened up a bit.

In the 79th minute, Hina Sugita saw her effort smack against the crossbar after beating her defender.

Yuka Momiki provided a much-needed spark off of the Japanese bench. She brought more pace to the right and also nearly scored.

In the 88th minute, the Netherlands won a penalty.

88’ Penalty for the Dutch! Kumagai is called for a handball in the box. VAR is reviewing the incident. #FIFAWWC #NEDJPN

Up stepped Martens for her second of the match. She sent Yamashita the wrong way and scored to secure the Netherlands’ position in the quarterfinals.

MARTENS SCORES FROM THE SPOT!

Is that the game-winner for the Netherlands? Martens gets her brace after a handball penalty is called and upheld by VAR. 2-1! #FIFAWWC pic.twitter.com/KYF4trKyX9

All of the quarterfinal matchups are now finalized. The Dutch become the seventh European team left in the competition, with only the United States representing another continent.

Now, the Netherlands will face Italy at 9 a.m. ET on Saturday.