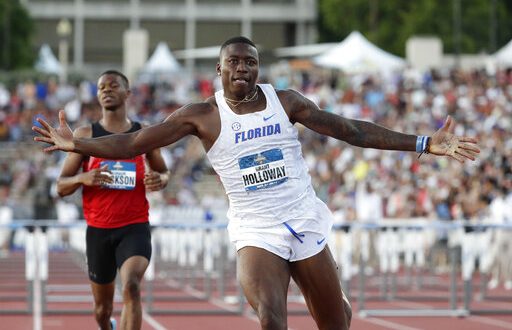 It seems as if all Florida Gator track and field star Grant Holloway does is win.

Holloway is known as one of the top collegiate athletes in the country. As a result, he was recognized by the Southeastern Conference athletic directors for his many achievements. Holloway is this year’s SEC Male Athlete of the Year. This is the seventh time a Gator athlete has won the award.

Turned in one of the most impressive seasons in Indoor Track and Field history.

He won four individual national titles and led @GatorsTF to an @NCAA Indoor Championships title.@Flaamingoo_ is the SEC Male Athlete of the Year. https://t.co/EjAkEamXO7 pic.twitter.com/Ix3XgLxWs4

Saying Grant Holloway’s resume is impressive would be an understatement. His list of accomplishments include numerous championships and record-breaking performances. Holloway, in this season alone, made himself known as the premiere collegiate athlete. This season, he captured four individual national championships. Holloway won his third straight national title in the 110 meter hurdle. In the process, he broke a record that stood for 40 years. Renaldo Nehemiah’s record of 13 seconds by finishing the event in 12.98 seconds. At the NCAA Outdoor Championships, Holloway became the only collegian to sweep both the indoor and outdoor high hurdles three straight years.

At the NCAA Indoor Championships, Holloway’s dominance only continued. In the 60-meter hurdles, he convincingly broke his own collegiate record by finishing in 7.35 seconds. This also broke an American record that stood for 32 years. Holloway’s time was the fourth-fastest in history. The record-breaking performance made him the No. 3 performer on the world all-time list.

With a victory in the 60 meter event, Holloway became just the third man in Division I history to complete a straightaway sweep. The feet is even more impressive given the fact he did so in record-breaking fashion. At 13.85 seconds, Holloway holds the fastest single-day time in the history of the sport.

Holloway becomes the fifth Gator to win the award. With this honor, he now joins elite company in University of Florida athletes. Other past winners include: Tim Tebow, Danny Wuerffel, Ryan Lochte, and Caleb Dressel. Tebow and Wuerffel won the award in consecutive years in 2008-09 and 1996-97 respectively. He also puts his name among some of the greatest athletes to ever compete in the Southeastern Conference. Other notable winners of the award include LSU’s Shaquille O’Neal, Auburn’s Bo Jackson and Vanderbilt’s David Price.

The accolades for Holloway aren’t done yet. Holloway is also up for The Bowerman. The award is given to the top collegiate track and field athlete.