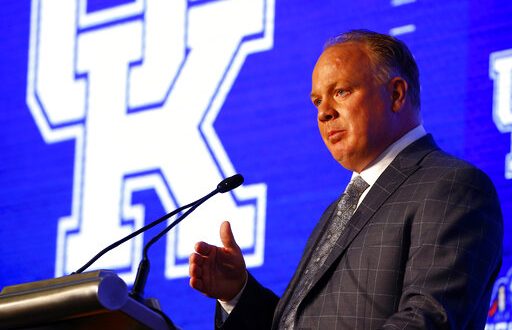 SEC Media Days have finally come to an end. This event was held in Hoover, Alabama where SEC teams sent players and coaches to represent their university. Various coaches where slated to speak at media day throughout the week. Among these coaches, Kentucky head coach Mark Stoops was one of them, who spoke on Thursday.

Mark Stoops career with the Wildcats

Stoops is entering his seventh season as Kentucky head coach. He has led his team to earning their third 10-win season in program history. He also led the team to victory in the Citrus Bowl.

Stoops was recognized for his breakthrough season and was named SEC Coach of the Year. Since he took over the program, Kentucky has become the only school in the nation that has tied or improved its win total in each of the last six seasons.

Stoops started his press conference by thanking everyone who has supported their football program. He also recognized the hard work from his football staff that has led Kentucky to major improvements.

Then he moved on to talk about the players that went with him to represent the football program. He talked highly of them and mentioned that their leadership on and off the field will impress everyone.

He then transitions to talk about their upcoming season. Stoops recognizes the importance of continuity for the 2019 season.

The Kentucky Wildcats had one of their best seasons last year earning their third 10-win season. Stoops recognizes that the little changes being made in the program have shown their progress and growth.

Stoops was also asked about Kentucky quarterback Terry Wilson and his improvements in the offseason. He responded by saying that they are working very closely with him. Giving him more time on the field will allow him to improve the areas he needs to dominate.

The Wildcats were able to defeat Florida last season, breaking a losing streak of 31 years. When asked about the odds of winning against Florida again this year, he avoided the question. He recognized that while it was an important game, they have to focus in all of them.

Another topic discussed was the upcoming Kentucky vs Arkansas match-up in this upcoming season. Kentucky has not faced Arkansas under Mark Stoops. He says that he is thrilled to be facing them and he is up to the challenge.

He recognizes that the SEC East keeps getting stronger with quality coaches and improved programs. Stoops says that he is not planning on staying behind. He states that his plan is to keep growing and improving along with the division.

Stoops was also asked his opinion on the transfer portal. He admits that he has mixed feelings about it. On one side, he acknowledges that players that find themselves in difficult situations should have the right to transfer. But on the other hand, he believes that players should honor their commitment with the team.

“You want to be human. You want to help kids. That’s what we’re here for. That’s why we’re in this business. But part of that is also being hard on kids and disciplining kids and helping them be accountable when they don’t necessarily want to, you know?”

Camila is a senior at the University of Florida, who served as a beat writer for the women's basketball team from 2019 until the 2021 season. She was also a beat writer for the Gators football team during the 2020 season. Camila is also WUFT's news director as well as a sports reporter/anchor.
@CamilaMaffuz
Previous South Carolina Looks to Limit On Field Mistakes in 2019
Next Ryan Day and Ohio State Begin Post-Urban Meyer Era