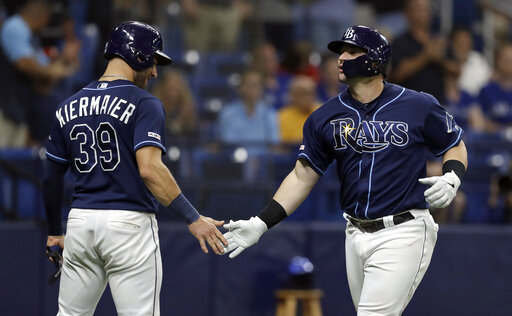 The Tampa Bay Rays have hit their stride as the postseason race heats up. Tampa Bay has won four straight series, including winning nine of their last 12 games. They hope to continue this hot streak as they start a six game west coast road trip. Tonight, they open a three game weekend series against the Seattle Mariners.

This trip is especially meaningful for former Gator catcher and current Tampa Bay Ray Mike Zunino. He spent six seasons behind the plate for the Mariners. This will be his first trip to Seattle since leaving them in the offseason. In his first season with the Rays, Zunino has struggled this season. He has a .175 batting average, seven home runs and 23 RBI.

In his final season with the Mariners, he had a .201 batting average, 20 home runs and 44 RBI. Zunino has performed well as of late. He hit at least one home run in two of the team’s past four games. Returning to a familiar setting could mean for a productive weekend for the former Gator.

The Rays’ recent success has catapulted them to prime positioning in the playoff chase. Heading into the series opener against the Mariners, the Rays sit a half game up on the Oakland Athletics for the second wild card spot in the American League. They are within striking distance of the top wild card spot, which is held by the Cleveland Indians. The Rays trail the Indians by three and a half games.

This upcoming stretch for the Rays can prove vital to gain some separation in the standings. They also might be able to catch the Indians with their schedule coming up. Starting this weekend against the Mariners, the Rays have 16 straight games against teams with a losing record.

Our coverage of tonight’s Rays game starts at 9:30 p.m.