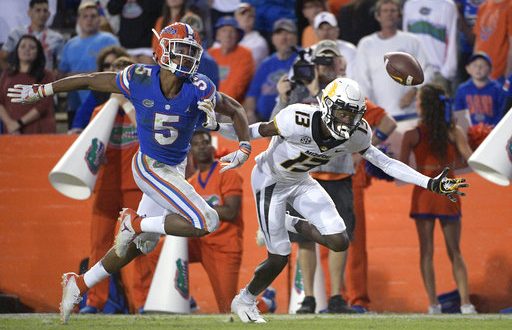 Gator Defensive Backs are Ready Despite Lack of Depth

Many know the Gators secondary as DBU. And even though there’s a lot of talent at the position, there’s not a lot depth with the defensive backs.

The Gators lost safety Chauncey Gardner Johnson III to the NFL Draft this year. In the off-season, cornerback C.J. McWilliams tore his Achilles tendon and will miss the entire season.

But despite the loss, the defensive back unit for Florida is confident about this upcoming season.

The depth cart that was announced this week:

Starting cornerback Marco Wilson, a South Florida native, missed most of last season due to injury. This week, he explained that he’s excited to make more of an impacted this season and that running out of the tunnel knowing he’s going to be able to play will feel like a big relief.

UF vs UM Match Up

Gators defensive coordinator Todd Grantham broke down why the defense as a whole will have to continue working on the game plan this week and that the guys really need to pay attention to details to be able to stay on the same page.

A player on Miami that the Gators defensive backs, including Wilson, believe to be very dangerous is wide receiver Jeff Thomas.

Wilson also mentioned that he looks forward to watching the upcoming home-and-home series with Florida and Miami because to the direction the two teams are going towards.

The older guys have been telling the younger defensive backs that they need to just pay attention to their job and not worry about “outside noise” to be successful. Trey Dean says that he’s confident that when the freshmen defensive backs take the field, they’re going to make an impact.

Dean also said that the unit wants to prove just how good they are this Saturday.