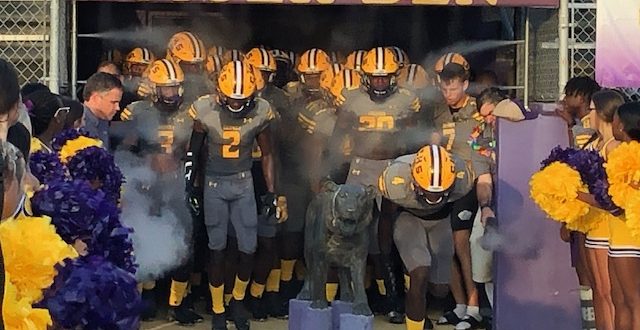 Last year, Trinity Christian Academy gave Columbia its only loss in the regular season. A blemish that didn’t sit well the rest of 2018 for the Tigers.

On Friday night, Columbia used that loss as fuel and defeated the Conquerors 38-7 at Tiger Stadium.

One of the main factors in Columbia’s win was its defense. After a touchdown run by Conquerors’ junior RB Kaleb Killian on their first offensive play, the Tiger defense didn’t allow another point the rest of the night.

The Columbia defensive front caused problems for the Trinity offensive line throughout the game. Conquerors’  junior QB Jacory Jordan was having to escape the pocket multiple times and had trouble connecting with his receivers.

Offensively, the Tigers started a little slow, but senior QB Jordan Smith was able to regain his composure and settle into the game. Smith, who is currently a USF commit, was able to make plays in the air and on his feet throughout the night.

Player on the rise

Columbia senior WR Lanadrick Bradley has waited his turn for a chance to finally have a breakout season. Friday night, the Tigers used Bradley at WR and RB for most of the game.

Head coach Brian Allen had nothing but positive things to say about Bradley who, according to Allen, battled injuries in his sophomore season and played backup to former WR Bobby Fulton.

“He’s going to be one that if you don’t get your eyes on him right now, someone else is going to swoop him up,” Allen said. “He’s come out this senior year taking full advantage of this opportunity, and he’s one that were going to need to play big all season.”

Bradley was also targeted the most in the passing game by Smith.

The Tigers showed they are a legitimate state title contender again in 2019. With QB Jordan Smith, RB Kylen Callum and WR Marquez Bell back for their senior seasons, there is a lot of confidence this team has what it takes to make it to Daytona come December.

Next, for Class 6A Columbia is a meeting with Oakleaf High School on Aug.30 in Jacksonville.

Caleb Wiegandt also contributed to this story. Thanks to a big halftime lead, the Hawthorne …