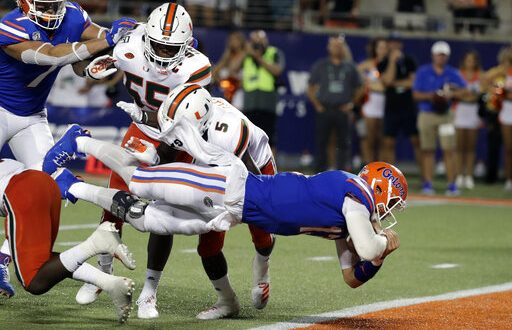 Florida quarterback Feleipe Franks dives over the goal line to score a touchdown on a 3-yard run past Miami safety Amari Carter (5) and linebacker Shaquille Quarterman (55) during the second half of an NCAA college football game, Saturday, Aug. 24, 2019, in Orlando, Fla. (AP Photo/John Raoux)

Gator coach Dan Mullen said it best when he sat down for post-game media. The Florida Gators left Camping World Stadium with a 24-20 win over the Miami Hurricanes.  However, the Gators with the off season swagger were missing. So was the Florida team looking to pick up where it left off last season.

Instead, flashy scoring plays were scant; the defense missed tackles against Miami’s young offense; Ttere were no “alpha dogs” wearing orange and blue. In short, the eighth-ranked team in the nation struggled to beat its in state rival.

Miami’s Jarren Williams got his first start and the red shirt freshman quarterback was impressive at times in going 19-for-29 while scoring a touchdown.  Florida’s Feleipe Franks, a third-year starter, went 17-for-27 while throwing two touchdowns and getting one on the ground but he also threw two interceptions.

“Obviously, I didn’t go out there and try to throw a pick,” Franks said. “But things happen throughout the course of the game that you don’t plan….it’s just all about trying to persevere through those kinds of things.”

At the start of the fourth quarter, Hurricanes running back DeeJay Dallas tore off a 50 yard run to give Miami a 20-17 lead.  Franks throws a pick on the next drive. A gorgeous pass breakup by CJ Henderson forces the Canes to line up for short field goal but Miami kicker Bubba Baxa misses his first attempt of the night. A big momentum shift.

Then, the Gators scored quickly; four plays. 80 yards. One minute and thirty seconds. All thanks to Feleipe Franks. In particular, a 65-yard bomb to trusty Josh Hammond, a short pass to Lamical Perine, 10 yards to Kyle Pitts, capped off by #13 rushing in for the score to get the Gators back on top.

“Even if things didn’t go right, if we made a mistake, he came right back firing,” said Mullen. “Just play the next play and let’s go.”

The Curious Case at Wide Receiver

Based on the depth chart, the Gators had six wide receivers who could have started the game. The Gator with the most receptions, however, was running back Lamical Perine. The senior caught six passes on eight targets (including a touchdown) for 25 yards. Josh Hammond was the next most targeted player, with four. He totaled 93 yards after catching all four passes.

The aforementioned 65 yard catch and run was his play for the highlight reel.

“[Franks and I] just needed time… I was able to execute and get down the field and get a touchdown to try to go secure the win,” Hammond said.

However, neither Perine nor Hammond is at the top of the totem pole, as far as the positioned is concerned. That spot goes to Van Jefferson. He is the only wide receiver who earned a starting spot without an “or” being listed on the depth chart. His most crucial play, though, was a recovered fumble deep in Miami territory that the Hurricanes muffed. He only caught one of three targets aimed his way. Wildcat Kadarius Toney started the game off with a 66-yard juke to put the Gators on the board. That would be Toney’s only target of the night.

“Exciting things happen when you put the ball in his hands,” Mullen said of Toney.

But he did not get the ball much in this game.

However, the Gators will have plenty to improve on defensively after this game especially in the missed tackles department where Florida did not do well.  Coach Mullen mentioned missed tackles four times after the game and for good reason. A Hurricane would get his hands on the ball and evade three or four guys before running out of bounds.

“There’s a lot we can learn from that game and a lot we can get cleaned up defensively. We can get that coached. We can be better coached and we can get them coached better, get the players to play better,” Mullen admitted about what could have been.

Those who were hoping to see Florida blow out Miami likely left Orlando disappointed. A four-point win did not even cover the -7 spread the Gators opened with. Whether it was first-game jitters or the pressure of the week zero match up, UF’s game left a lot to be desired.

The inexperienced Florida offensive line did not open up many rushing lanes as Florida had less than 100 yards rushing in the game but Franks was only sacked once in the contest.  Missed tackles, too many penalties and turnovers are hopefully some things that can be fixed in practice.

Now the Gators have a bye week to work out their issues and even though the win may not have been impressive, it did come against an in state rival on a big stage.

“Our guys found a way to win,” Coach Mullen beamed. “And that’s what’s most important.”

With the 2020 college football season in the rearview, the Gators are ready to go …