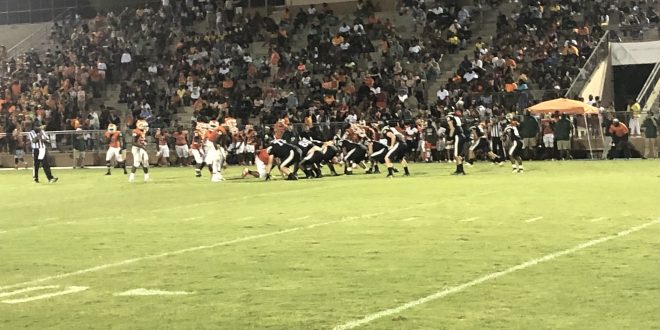 Buchholz Defeats Eastside in a Thriller

The Eastside Rams’ offense ran to their sideline celebrating their successful two-point conversion. The Rams thought they just ended their six-game losing streak to the Buchholz Bobcats but then they saw that there were flags on the play.

The Rams were called for an illegal shift resulting in a five-yard penalty. Because of the penalty, the Rams were forced to try the extra point to knot the game up at 21-21.

The snap and the hold on the extra point was clean. However, senior Bobcat Damien Lewis exploded off of the line of scrimmage.

The Bobcats’ rushing attack was unstoppable. Every time one of their tailbacks got the hand-off from Hevesy, they would earn about three or four yards on the carry.

Junior running back Quan Smith handled most of the workload and finished with almost 200 yards on the night. He also had a 40-yard touchdown reception on a delayed screen too.

Bobcats’ head coach Mark Whittemore pointed out that their offensive-linemen allowed Smith to have a big night.

“We have three division one commits on that offensive line, so they’re no slouches,” said Coach Whittemore. “They opened up some big holes, and that is what it looks like.”

Buchholz understood coming into this week one matchup that stopping Eastside’s quarterback Anthony Richardson would be key. Richardson is a senior for Eastside, and he is committed to playing quarterback at the University of Florida next fall.

Richardson is known as a dual-threat quarterback, and he has a knack for extending plays with his feet. In order to properly prepare for him, Coach Whittemore brought in a former Florida Gator walk-on quarterback to help prepare for the challenge.

“Our defensive-coordinator Chuck Bell and his staff really worked hard during this last practice week,” said Coach Whittemore. “We had one of our teachers come out, who is a former Gator quarterback (Jeff Creveling), and run around to try to give our kids a taste for an offensive play to last 10 to 12 seconds.”

Because of that preparation, the Bobcats put in, they did a good job Friday night slowing down Richardson.

Buchholz junior running back Smith took a 45-yard run up the middle to the house on a second and six early in the first quarter to open up the game. The point-after attempt was missed to make the score 6-0.

Eastside responded with their own scoring drive. On fourth and goal, senior Eastside quarterback Richardson plowed over to Rams linebackers to score six.

Eastside did convert the extra point to make it 7-6 Rams at the end of the first quarter.

On the ensuing Buchholz drive, Damien Curtis took a jet-sweep handoff after a long drive from Buchholz quarterback Jack Hevesy and ran 11 yards to make the score 12-7 Bobcats. The Bobcats converted a two-point conversion to take a 14-7 lead into halftime.

Coming out of halftime, Richardson completed a 58-yard touchdown pass to Arnold Strachan to make the game 14-14.

Buchholz would respond later in the third quarter with a 40-yard screen pass from Hevesy to Smith. Bobcats’ kicker Hunter Smith converted the extra point this time to make it 21-14.

Late in the fourth quarter, Richardson led his Rams on a 67-yard drive to get the score to 21-20. Following an illegal-shift penalty, the Rams decided to go for the tie instead of the outright win but Lewis blocked the Rams’ kick to clinch the game for Buchholz.

Zachary Huber is a senior journalism student specializing in sports media at the University of Florida from Jacksonville, Florida. He works at The Alligator, covering gymnastics and volleyball while working at ESPN Gainesville. Follow him on Twitter @zacharyahuber.
@@zacharyahuber
Previous Hawthorne Wins a Defensive Battle 14-7 Against P.K. Yonge to Start the Season 1-0
Next Columbia rolls in win over Trinity Christian Academy