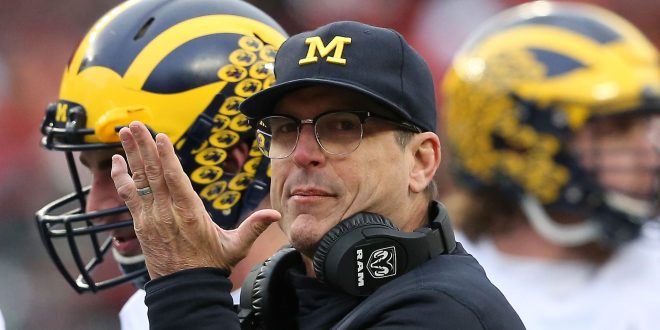 Is this Michigan’s Year to Go Far?

Jim Harbaugh arrived in Ann Arbor nearly 4 years ago and ever since then the expectations have been high. The University of Michigan expects its football team to beat Ohio State, appear in Big Ten Championships, and make it to the College Football Playoffs. There is a certain standard for Wolverine football. Jim Harbaugh was thought to be the guy that would bring it back.

The Wolverines have reached 10 wins in three out of four seasons with Harbaugh. Most would call this successful. Michigan fans, however, are not satisfied. They have gone 0-4 against rival Ohio State and have yet to make a playoff appearance. Will this finally be the year that Michigan has a breakthrough season?

The time is now and here’s why it could be Michigan’s year.

The Wolverines have a returning quarterback for the first time in all of Harbaugh’s tenure in the program. Senior Shea Patterson is expected to thrive in a new and fully implemented spread offense. Josh Gattis, the Wolverine’s new offensive coordinator from Alabama, has completely abandoned the traditional pro-style offense. Patterson has experience with the spread offense and with Gattis’s knowledge it is likely that Patterson will reach his full potential this season. Michigan also has four starters returning on the offensive line. Two of which have played since they were just freshman. Cesar Ruiz and Ben Bredeson will be the leaders on this offensive line.

Michigan has the fourth-best odds of reaching bowl season undefeated, according to ESPN’s Football Power Index Projections. Although the Wolverines will face six teams that are in the preseason AP Top 20, their schedule is definitely winnable. As usual Ohio State will likely be the Wolverine’s toughest matchup of the season.

The Wolverines do have the Buckeyes at home and with the departure of Urban Meyer this is the year to end their losing streak. Harbaugh’s team also has two tough road games on tap. They’ll travel to Wisconsin to face the Badgers on September 21st and take on Penn State on October 19th.

Some say this is a make or break year for Harbaugh. Only time will tell. One thing for sure is that the excitement is brewing in Ann Arbor. Here’s what Harbaugh had to say.

Michigan opens the 2019 season against Middle Tennessee on Saturday at 7:30 p.m.

Maddie Schmidt's goal is to become a college football reporter. Be sure to check out her sports blog, mygamedaygal.com.
@@maddieschmidt15
Previous Gator Volleyball Is Back and Ready to Go
Next Aggies Prepare for Opener Against Texas State