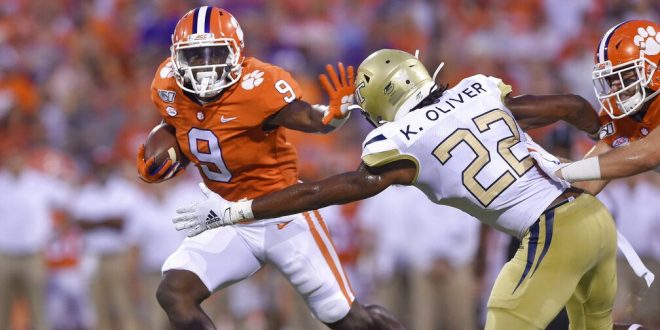 Clemson's Travis Etienne (9) fends off Georgia Tech's Kaleb Oliver to gain a first down during the first half of an NCAA college football game Thursday, Aug. 29, 2019, in Clemson, S.C. (AP Photo/Richard Shiro)

Thursday night football is a rarity in the college football world, and the only one with multiple matchups this season. Thursday featured several blowout games from teams like Clemson, Texas A&M, Utah and UCF.

No. 1 Clemson vs. Georgia Tech

Clemson began its 2019 season by showing everyone why they are the reigning national champions. Travis Etienne had a lot to prove coming off last season and he did just that.

The running back started the game slow, after a first quarter fumble, but he never looked back. Etienne rushed for a career-high 205 yards and three touchdowns. One of these touchdowns even tied for the longest touchdown run (90 yards) in Clemson history.

Etienne helped carry the team to a 52-14 win after an uncharacteristic performance from quarterback Trevor Lawrence. He threw two interceptions in the first half after having just four picks all last year.

With No. 1 Clemson ahead next week for Texas A&M, it would have been easy for the Aggies to brush over their date with Texas State. However, Texas A&M focused on the matter at hand and handed Texas State a 41-7 defeat.

Another bright spot of the game was first year starter Jashaun Corbin who had 103 yards rushing with a touchdown reception and a TD run.

Texas A&M looked pretty solid with the exception of four interceptions, two of which were from Myles Jones. This is the most interceptions that the Aggies have had in a game since 2006.  However, the Aggies did have three sacks and nine tackles for loss.

All three UCF quarterbacks saw action in their season opener and combined for 356 yards during their 62-0 win against Florida A&M.

Brandon Wimbush, a transfer from Notre Dame who won the UCF starter position over the summer, threw for 168 yards and two touchdowns. Second string Dillon Gabriel looked promising as well after coming in and throwing for 127 yards.

Utah’s defense led the way to a 30-12 win last night over BYU. Utah scored three touchdowns off three BYU turnovers to break apart from the cougars. This left no question on how strong Utah’s defense can be this season.

On the offensive side, running back Zach Moss was the highlight. He ran for 187 yards and a touchdown to help bring the Utes to victory, even with a protective splint on his hand.

Utah’s offense totaled just 125 yards in the first half and had to turn to their defense before halftime even began. However, their offense came back to life at the start of the third quarter with a 75-yard touchdown drive.