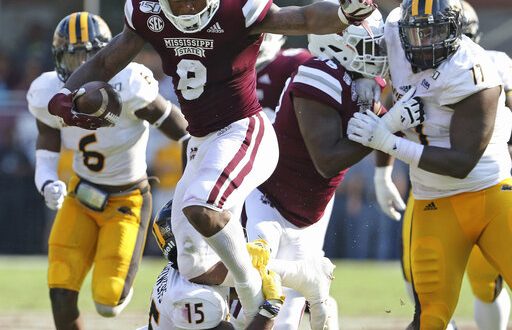 In its first season in three years without Nick Fitzgerald under center, the Bulldogs are starting Penn State transfer Tommy Stevens. However, a lower-body injury is keeping the senior day-to-day ahead of Kansas State. If Stevens cannot play, Mississippi State will either start true freshman Garrett Schrader or junior Keyaton Thompson (Thompson is back on the team after entering the transfer portal earlier in the season).

However, a game without Stevens could test the home team. Against Southern Mississippi and Louisiana, Stevens completed 72.5% of his passes for 341 yards, tossing four touchdowns and no interceptions. Thompson was a formidable backup for Fitzgerald when called on, but there is a reason he did not win the starting job.

Coach Joe Moorhead said the best of the three will get the start on Saturday.

The Bulldogs can rely heavily on the run with junior Kylin Hill as starting running back. Hill leads all SEC backs in rushing yards with 320 yards on 41 attempts. Hill also has two touchdowns to his name.

“He combines small back characteristics in a big back body. He can get a play that’s blocked for one or two four or five because of his pad level and his physicality, and he’s a guy we get in open space. He’s able to make people miss.”

Due to a flurry of Bulldogs electing to play in the NFL, Mississippi State’s defense is in a rebuild. The team’s total defense finished second in the country after the conclusion of last season. This season, it ranks 81st after defeating opponents in the Conference-USA and Sun Belt conferences. Despite the offense putting up 38 points in each game, the defense allowed 28 from Louisiana and 15 from Southern Mississippi.

Kansas State may not have the offense Mississippi State does, but manipulating the defense could put the Wildcats on top.

Kansas State ranks 8th in total defense after allowing 416 total yards compared with Mississippi State’s 774. The Wildcats may have two defensive starters with experience out against the Bulldogs, though. Redshirt junior starting defensive back Walter Neil, Jr. will likely be a game-time decision. Sophomore defensive end Wyatt Hubert, who made the 2018 Freshman All-America team, is likely to be either limited or out against the Bulldogs. Both starters are classified by coaches as “hopeful.” But, if two of the Wildcats’ best defenders out against an SEC opponent, it is not a stretch to say the team is at a disadvantage.

Starting quarterback Skylar Thompson is posting a 74.8% completion rate with three touchdowns and no interceptions. While Thompson’s completion percentage may be skewed due to lower-level opponents, it is impressive nonetheless. However, three passing touchdowns out of 101 points in two games shows where Kansas State likes to stretch its offense.

James Gilbert, the Wildcats’ starting back, is small at 5-foot-9, 198-pounds. But, the Ball State transfer has 218 yards and three touchdowns in two games. While Mississippi State relies on Hill to get extra yards, Kansas State likes to mix up its back rotation. Backs Jordon Brown (2), Harry Trotter (2) and Tyler Burns (1) have all rushed into the endzone. At receiver, Malik Knowles (2) and Dalton Schoen (1) aided Thompson’s two passing touchdowns.

There is always something to be said for fresh legs making plays.

This game is likely to be a battle of the backs, with Hill and K-State’s rushing corps leading the offense for both teams. As far as defense, the Wildcats’ success could ride on whether or not Neil, Jr. and Hubert are able to get meaningful minutes. Meanwhile, Mississippi State’s defense could lock in, but it also might still be going through growing pains.

ESPN gives the Bulldogs a 74.3% chance to win the game at home; however, stranger things have happened.