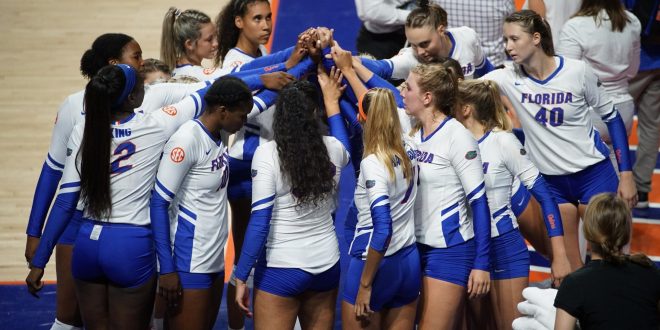 The 11th ranked Florida volleyball team capped off the Gator Invitational with a 3-2 win over Long Beach State in a five-set thriller on Saturday.

In the fourth set, Florida rallied back to against the Bulls, winning 25-13 and taking the match.  Florida ended the first day of competition with a 3-0 sweep over James Madison University.

Florida middle blocker Lauren Dooley led the Gators’ offense with five kills in the first set. Dooley ended the night with 14 kills.  For Long Beach State, outside hitter Kashauna Williams led the offense, recording a total of 26 kills on the night.

In the second set, Florida rallied back to even the match with a 25-16 victory as middle blocker Darrielle King recorded a career-high 15 kills for Florida.

Florida continued their offensive success in the third set winning, 25-20.  With the score at 18-17 in favor of the Gators, Dooley and Holly Carlton combined for a block that gave the Gators a 19-17 lead. Carlton recorded 11 kills, one assist and three digs.

Florida coach Mary Wise comments on the performance from Dooley and King.

Florida returns to the court Tuesday night at 6 p.m. to host No. 25 Florida State. You can listen to live coverage of Tuesday’s rivalry match-up on ESPN 98.1 FM/850 AM WRUF.