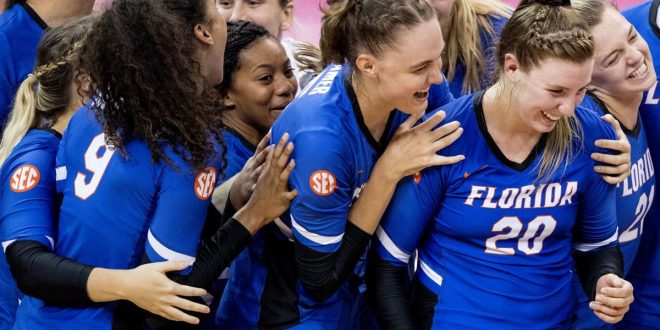 The 11th ranked Florida Gator volleyball team (5-2) hosts number 23 Florida State (5-2) on Tuesday night in Gainesville.  The 2019 Sunshine State Showdown will be the 63rdmeeting between the rivals.  The last match between these two teams ended in a three set victory for the Gators in the first round of the 2018 NCAA Tournament.

The Gators are coming off of a five-set thriller against Long Beach State, winning the fifth set 19-17.  Florida’s offense is led by outside hitter Thayer Hall, who leads the team with 92 kills this season.  Additionally, outside hitter Paige Hammons has been one of Florida’s most versatile players, leading the team in service aces, also recording 45 kills, 48 digs and 12 blocks.

Florida State is currently on a three match win streak, defeating opponents TCU, Stony Brook and St. John’s.  Earlier in the season Florida State completed a huge upset against the third ranked Minnesota Gophers, a team that Florida lost to in three sets earlier this season on the road.

You can view Tuesday night’s rivalry match-up live on the SEC Network beginning at 6 p.m. Additionally, you can listen live on ESPN 98.1 FM/850 AM WRUF.