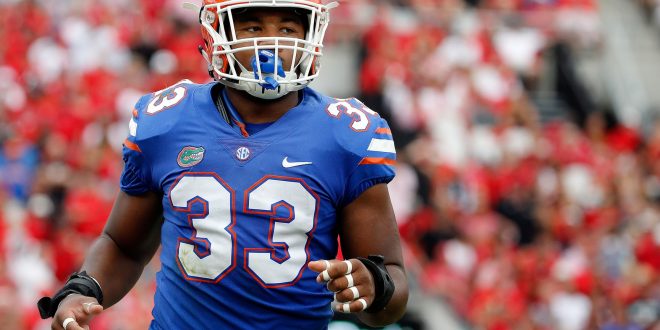 It’s no secret that the Florida Gators showed out in the second half of Saturday’s matchup at Kentucky. They scored 19 unanswered points in the fourth quarter alone. But senior linebacker David Reese III stepped up in a big way on the defensive end. The Michigan native finished with a career-high 16 tackles. And 13 of those were solo. Reese may have even kickstarted the Gator’s comeback, after stopping Kentucky’s run on 4th and 1 at the end of the third quarter.

Looking back, and looking ahead

Last year, Reese couldn’t play against Kentucky. He was out the first three games of the 2018 season due to an ankle injury. He said that being healthy to play in this game, in a hostile environment in Lexington, was exciting.

His performance on Saturday earned him SEC defensive player of the week. With his 16 tackles in the win (which he says he hasn’t done since high school), he now totals 23 on the season. Last year he totaled 77 tackles, and it seems he is well on his way to smashing that number this year.

Even though the Gators are just three games into the season, the team is already riddled with injuries.

The biggest injury thus far is to starting quarterback and team leader Feleipe Franks. He went down near the end of the third quarter and sustained a season-ending ankle injury. Coach Mullen called on redshirt junior Kyle Trask. Trask responded by completing nine of 13 passes and totaled 126 yards. And although Reese says the team didn’t usually practice with the backup quarterback, they have full confidence in his abilities going forward.

Reese’s defensive squad is also dealing with injuries. Defensive back C.J. Henderson sat out of the Kentucky game with an ankle injury, and it’s unknown if he will play Saturday against Tennessee. Meanwhile, fellow defensive back Donovan Stiner is suspended for the first half of this Saturday’s game, after being ejected for targeting in Lexington. Reese said getting his defense healthy is important as SEC play begins.

Reese said that he expects Tennessee to put the ball on the ground this weekend. While the Volunteers lost their first two matchups, Reese said the team is still preparing for a competitive matchup. Kickoff at Ben Hill Griffin Stadium is at noon.