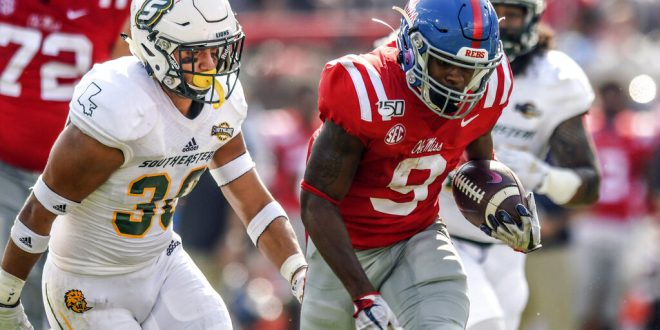 The Ole Miss Rebels are up against No. 23 California Golden Bears at home for week 4. Ole Miss is on a two-game win streak since the team dropped its first game to the Memphis Tigers.

California on the other hand is coming into the game undefeated; including a then ranked No. 14 Washington Huskies.

Despite Cal being the ranked team in the game, ESPN’s Football Power Index favors the Rebels.

What Makes The Rebels Favorable?

Strength of victory could be a factor.

While Cal has won three games, including a ranked team, they have all been by two touchdowns or less. The victory over Washington was by a single point. North Texas revealed some holes in the Golden Bears’ game by holding them to three points after Cal’s 20 point first quarter; final score 23-17 Cal.

Ole Miss on the other hand, has won their last two games by significant margins: 31-17 over Arkansas and 40-29 over Southern Louisiana. It appears the odds makers factored in the Rebels’ strength of schedule because while Ole Miss is given a 62.1 percent chance to win, they’re only favored to win by less than field goal (-2.5).

Despite the odds and a potential time zone disadvantage, Cal Head Coach Justin Wilcox is ready. Wilcox said his team is prepped and is prepared for the matchup over Ole Miss:

The Golden Bears are ready to show why the team was ranked.

Breaking Down the Teams

Both teams are strong in the air and on the ground offensively. Any difference in total offensive yards is minimal. The biggest hole for either is the Rebels pass defense; which has allowed 260.3 of the 366.7 total yards allowed per game this season. But, this could be the game to address the issue. Cal’s Quarterback, Chase Garbers, has thrown a single touchdown in the last two games.

If the Rebels want to show their pass coverage is a non-issue, now is the time.

A huge key to success for Ole Miss will to keep the pressure on the Golden Bears’ passing game is they want to pick up a win this week.

Harrison is a sports coordinator at ESPN 98.1 FM/850 AM WRUF. He served as a beat writer for Florida Gators football for the 2019 and 2020 seasons. He also contributes to WRUF's Gainesville Sports Center segments and makes appearances on the Clash on Harp on Sports. Harrison has been a content writer for WRUF since January 2019 as well.
@HarrisonSmaj
Previous Gator Defensive Backs Making It Work
Next No. 2 Alabama vs Southern Miss: Team Previews and Prospects to Watch