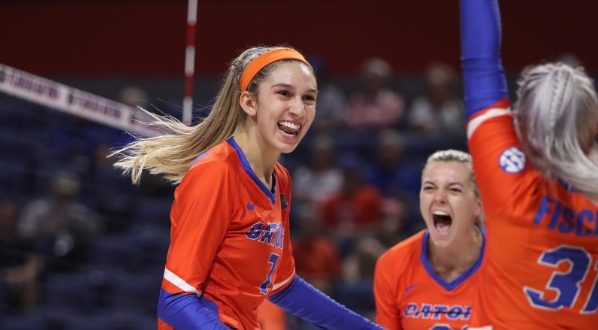 The Gators seemed to do just about everything right on Friday. The number 11 Gators swept Liberty and Northern Arizona in their first day of the Gator Invitational.

Mary Wise’s squad averaged a .365 hitting percentage over both matches. Thayer Hall continues pacing the team on the offensive side of the ball with two more double-digit kill performances.

She led the team with 13 kills and an astronomical .462 hitting percentage in the sweep over Northern Arizona. On the day she posted 23 kills on 49 attempts and hit at a .388 clip.

“You hit .388 as an outside hitter, that’s middles type of offense,” Wise said.

Speaking of middles Rachael Kramer put up numbers against Liberty in the earlier match. Kramer went off for 12 kills on 16 swings and not a single attack error against

However, Florida lost to Northern Arizona last season in five sets during the Lumberjack Invitational. This time the Gators came back the next season and avenged that loss.

Paige Hammons did not contribute much offensively in that 2018 matchup but made an impact on defense with four blocks and 13 digs. This time she matched that dig total but now threw in eight kills and two aces for Florida to finish with the second-highest point total with 11.

The Gators were outhit in 2018 .288 to .244. Florida turned it on in round 2 with a .333 performance and forcing NAU to just .053 on offense. Florida actually had double the amount of total kills as the Lumberjacks.

Wise on facing the Lumberjacks again:

Chanelle Hargreaves did not even play against Northern Arizona last season. On Friday night she showed work she put into her service game with three aces against the Lumberjacks.

“She was in the zone,” Wise said of Hargreaves. “I had some thoughts about giving someone else a chance to serve but I thought ‘How do you take the ball out her hands?’ she’s serving so well.”

Florida is back in action on Saturday against Louisiana at 3:30 then starts conference play at home against the Auburn Tigers on Friday.