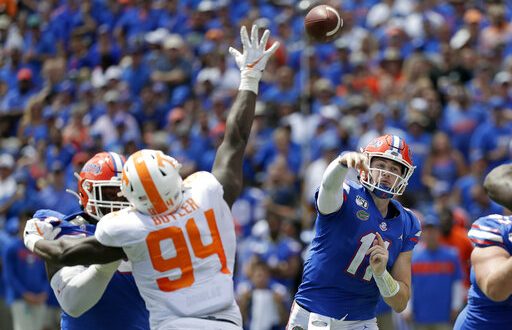 Prior to Florida’s game against Tennessee on Saturday, Kyle Trask entered Ben Hill Griffin Stadium by way of the Gator Walk — just as he does every home game.

But this was different.

Instead of smiling and high-fiving fans, Trask was smug. Emotionless. Locked in.

Being the starting quarterback at the University of Florida is no easy gig. But Trask made it appear easy as he ripped the Volunteers’ defense to shreds in a 34-3 rout in The Swamp.

That was it. That’s all that had to be done. Trask did it — he broke through.

And the rest is history.

While we did see glimpses of redshirt freshman Emory Jones, it’s safe to say that this is Trask’s football team.

In the opening half, Trask eclipsed 200 yards while posting 204 passing yards — completing 12 of his 14 passes.

However, despite Trask’s impressive start, he also threw two interceptions to the Volunteers.

The Manvel, Texas native finished the day 20-28 with 293 yards, 2 TDs and 2 INTs. But why isn’t anyone talking about those two interceptions? Those matter, don’t they?

They do, they often do. However, on a day like Saturday when Florida’s defense came away with four turnovers of their own, those measly and otherwise meaningless interceptions are swept under the rug.

The Volunteers made just two trips to the red zone in four quarters of play.

Of the Vols’ 11 drives, five ended in punts while four others ended in turnovers — three interceptions and one fumble.

Sophomore linebacker Amari Burney recorded his first interception and his first fumble recovery of his college career while Marco Wilson and Trey Dean III also tallied their first INTs of the 2019 season.

However, graduate transfer Jonathan Greenard led the Gators defensively bringing home three batted passes, one forced fumble and four tackles — two of which were for losses.

The Volunteers, who are struggling through growing pains that come with an inexperienced offensive line, came into Gainesville ready to combat the Gators’ pass rush with quick passes. However, Greenard read that like a book.

Saturday’s victory over the Volunteers was undoubtedly the most dominant performance from the Gators’ defense, who suffered through lapses against Miami in week zero and Kentucky last week. Yet, Greenard said this is just the beginning for his defense.

During SEC Media days earlier this year, Gator running back Lamical Perine dismissed the notion of Tennessee being a rivalry game.

“I wouldn’t say it’s a rivalry,” Perine told reporters back in July. “It’s just another game. We prepare just like it’s a regular game.”

Back in the 90s, Steve Spurrier really started a feud with the Volunteers. However, with Florida now winning 14 of the last 15 meetings, perhaps the rivalry is on the way out the door.

However, Tennessee is a division opponent. And now, the Gators are 2-0 in the SEC East, which is exactly where Mullen wants his team to be.

Florida’s bid to go 5-0 continues next week with Towson at home. The Gators will kickoff at 4 p.m. from Ben Hill Griffin Stadium Sept. 28.

Ainslie is a journalism major at the University of Florida where she specializes in Sports Media. Her main passion is college football as it was a huge part of her childhood. Ainslie serves as a current correspondent for the Ocala Star-Banner, a newspaper for the Ocala, Florida area. She currently covers Marion County high school sports.
Previous Gators Volleyball Dominates Day 1 of Gator Invitational
Next Saints Baseball Kicks Off Fall Season at the Polk State Tournament