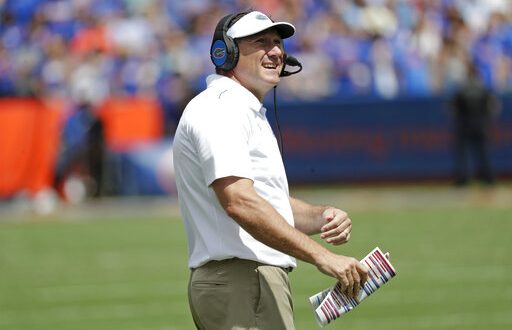 Florida head coach Dan Mullen looks at the scoreboard during the first half of an NCAA college football game against Tennessee, Saturday, Sept. 21, 2019, in Gainesville, Fla. (AP Photo/John Raoux)

Mullen Talks Towson: ‘They Know How to Win. They Expect to Win.’

After a dominant win against Tennessee in the Swamp, Florida Gators head football coach Dan Mullen addressed the media on Monday to discuss the next opponent: the (FCS) top-10 ranked Towson Tigers.

The Tigers are coming off their first loss of the season to Villanova in overtime at home. But despite the loss, quarterback Tom Flacco (yes, Joe Flacco’s younger brother) put on a stellar performance against Villanova. He passed for a total of 304 yards and rushed for 110.

Flacco, last season’s CAA Offensive Player of the Year, is pleased with how the offense is gelling.”I think the composure we have as an offense is really great,” the redshirt senior told PressBox Baltimore. “My relationships are deeper with the wide receivers, with the offensive line, the running backs. I’m not just the transfer that came in June, so I’ve created more relationships with everyone, the coaches included. For me, I just feel more comfortable.”

The Tigers have scored more than 40 points in three of their games this season. Mullen has noticed that.

Preseason predictions have Towson finishing second in the CAA, securing a spot in the FCS Playoffs for the second year in a row. The Tigers came up short last season, losing to the Duquesne Dukes in the first round.

Mullen, who is impressed with the Tigers’ roster, had nothing but positive things to say about the program.

“Being a top-10 team, they know how to win,” he said. “They expect to win. And you can see that in how they play and how they are in games.”

According to the Tampa Bay Times, Tigers head coach Rob Ambrose said the Gators are among the best in the nation in skill players. He also shared a prediction about Florida’s postseason.

Towson HC Rob Ambrose on #Gators: "This is one of the best football teams I have ever seen on film. These guys will challenge for the College Football Playoff. They’re really, really good.”

Florida and Towson will face off at 4 p.m. in The Swamp on Saturday. The teams are playing each other for the first time in the programs’ history.

Camille Woodhouse is a Sports and Media student at the University of Florida College of Journalism and Communications. In the past, she has covered the Atlanta Falcons and Florida Gators football for various sports news outlets. She is an Atlanta native and a fan of football.
@CJW_SportsRadio
Previous MLB Sets New Record With Four 100-Loss Teams
Next Bears Down Redskins on Monday Night