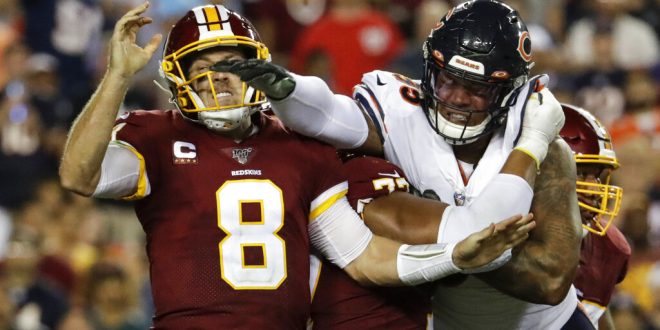 Chicago Bears outside linebacker Khalil Mack (52) hits Washington Redskins quarterback Case Keenum (8) to cause a fumble during the first half of an NFL football game Monday, Sept. 23, 2019, in Landover, Md. (AP Photo/Julio Cortez)

Bears Down Redskins on Monday Night

The Bears’ defense led the way while Mitchell Trubisky was solid throughout the night as Chicago defeated the Washington Redskins 31-15.

Hot Out of the Gate

Chicago would strike first on a Ha Ha Clinton-Dix interception that would be returned 37 yards for a touchdown. Clinton-Dix had a huge night against his former team with two interceptions, seven tackles, two pass deflections and the touchdown. Bears’ Head Coach Matt Nagy commented on his new defensive back’s play.

The Bears’ offense took over in the second quarter large in part to Taylor Gabriel. Gabriel had 75 yards on six receptions while hauling in three touchdowns. In addition, he arguably made the play of the night.

Mitchell Trubisky, who has been shaky to start the season, had his best performance of the season. He completed 25 of 31 passes (80.6%) for 231 yards and three touchdowns to go along with one interception.

Trubisky and the rest of the Bears offense seemed comfortable throughout the night with a fast-paced, no-huddle offense to get out to an early lead. Trubisky credits the entire offense as they found a rhythm and clicked with one another.

Case Keenum had a much better second half than first. He had two touchdown passes to go along with 332 yards passing albeit three interceptions. The Redskins had an opportunity to move within once possession but turned the ball over on downs in Bears’ territory early in the fourth. Listen to hear how Keenum’s thoughts on the performance:

One of Keenum’s touchdown passes went to rookie Terry McLaurin, who has started his career strong. The third-round pick finished the night with 70 yards on six catches and a touchdown. McLaurin has at least five receptions, 50 yards and a touchdown in each of his first three games.

Khalil Mack had a strong night anchoring the Bears’ defensive line. He had two sacks and two forced fumbles to go along with three solo tackles. Danny Trevathan had a big night leading the linebackers as he finished with eight tackles (one sack), two quarterback hits and a forced fumble.

Both teams face division rivals next week as the Bears host the Minnesota Vikings and the Redskins travel to take on the New York Giants in search of their first win of the season.

Previous Mullen Talks Towson: ‘They Know How to Win. They Expect to Win.’
Next Tampa Bay Rays Trying to Hold Wildcard Spot