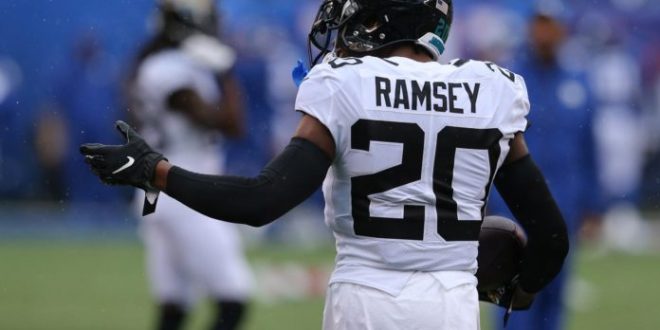 The soap opera that is Jalen Ramsey has taken another twist. It feels like an episode of Days of our Lives with the Jaguars all-pro cornerback.

Ramsey informed head coach Doug Marrone Monday that he was sick and was going to miss practice. This comes a week after Ramsey requested a trade from Jacksonville after the team’s 0-2 start.

However, Marrone isn’t worried that Ramsey being sick and wanted a trade are related.

Is it a coincidence? Fall is flu season, so it’s plausible. But, given the circumstances surrounding Ramsey, it raises a few eyebrows as to how legitimate the sickness is. Ramsey reportedly was at team facilities on Monday wearing a hoodie despite the temperature being in the 80s.

This isn’t the first time Marrone has had to deal with sick players, so it’s not a surprise to him.

The standoff continues between Jalen Ramsey and the Jaguars.

Even if being sick is unrelated to Ramsey’s gripes with the team, the trade demand is still on the table. Even though the Jaguars have stated they have no interest in trading Ramsey, he still wants out. However, it will be a high price to pay for any prospective buyers. Jacksonville reportedly wants at least a first-round draft pick and a defensive back for Ramsey. Teams that have shown interest so far include the Baltimore Ravens, Kansas City Chiefs and the Seattle Seahawks.

Ramsey has gotten off to a slow start this season. He’s totaled 18 tackles in three games and has one pass breakup. He has also forced a fumble.

However, he hasn’t been as stellar in coverage as he was in 2018. Through three games Ramsey has allowed 73.3 percent of passes thrown in his direction. Opposing quarterbacks also have a 118.8 quarterback rating against Ramsey.

Despite the sluggish start, Ramsey remains one of the best defensive backs in the NFL. As of now, the Jaguars are expecting Ramsey to play Sunday at Denver.