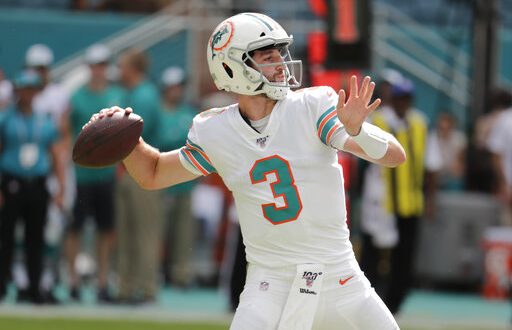 The Miami Dolphins held their first lead of the season against the Los Angeles Chargers on Sunday afternoon. However, they ultimately fell flat, losing 30-10, and dropping their fourth consecutive game on a winless campaign.

For the Dolphins, it was a story of two halves. Miami jumped out to an early 7-3 lead after a 34-yard completion to DeVante Parker gave them their second touchdown of the year. Dolphins quarterback Josh Rosen looked sharp in the first half, completing 12 of 16 for 169 yards and a touchdown.

After the Chargers jumped to a 17-10 lead at halftime, they didn’t look back. The Dolphins simply couldn’t stay in the game, failing to score and continuing their scoreless drought in the second half. Miami has been outscored 81-0 in the second half this season.

After combining for 197 offensive yards in the first half, the Dolphins fell flat with 36 yards in the second half. Still, Dolphins head coach Brian Flores recognized Rosen’s early success after the game.

An aspect of the game that intrigued Chargers fans and fantasy football owners alike was the situation with running back Melvin Gordon. NFL insider Ian Rapoport confirmed Sunday morning that Melvin Gordon would be active for the game, but his role would be limited. Gordon ended up staying on the sideline all game. Current leading man Austin Ekeler combined for 122 all-purpose yards with two total touchdowns.

After the game, Chargers head coach Anthony Lynn told the media that Gordon would get more carries in week 5 but still hasn’t confirmed how the two backs will share the ball. He did, however, express confidence in his veteran running back.

Ekeler’s 490 all-purpose yards rank fifth in the NFL through the first four games, so it should be interesting to see how Lynn manages the workload going forward.

The Dolphins were the NFL’s worst run defense entering Sunday’s matchup. They managed to hold the Chargers to 79 yards on 33 carries, averaging out to 2.4 yards per carry. However, their success defending the run was balanced out by their inability to defend the pass.

Chargers’ quarterback Philip Rivers torched the Dolphins secondary, throwing for 310 yards and two touchdowns with a quarterback rating of 131.9.

After a horrendous start to the NFL season, in which the Miami Dolphins set all kinds of worrisome records, they will finally get a break this weekend. They head into a Week 5 BYE before hosting another winless team, the Washington Redskins, on October 13.

The Chargers will seek their third victory of the season against the Broncos.

FINAL: Philip Rivers and the @Chargers get the win in Miami!#LACvsMIA pic.twitter.com/g0R4LcJyLO

I'm a third-year student at the University of Florida passionate about storytelling and sportswriting. My goal is to work in communications for a professional sports team after I graduate.
Previous Jacksonville Jaguars Defeat Denver Broncos in Final Seconds
Next Mullen Talks Auburn: ‘They’re Gonna Be Very Aggressive’