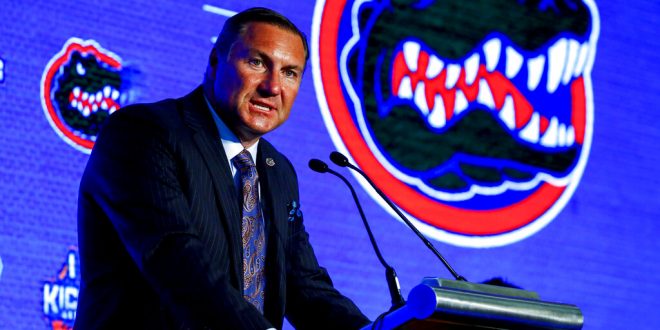 The Florida Gators throttled the Towson Tigers in their second shutout of the season on Saturday. But now, another team of Tigers are coming to the Swamp: No. 7 Auburn. On Monday, head football coach Dan Mullen talked to the media about the highly anticipated top-10 matchup.

Tigers quarterback Bo Nix splashed headlines at the start of the season. He was the first true freshman quarterback at Auburn to start a season-opener since 1946.

Nix threw for 335 yards and rushed for 56 in Saturday’s 56-23 rout of Mississippi State. He became the first Auburn quarterback to throw for 300 yards and rush for 50 since Cam Newton in 2010. The performance earned Nix an SEC honor for the second time this season.

Mullen, too, had high praise for the young dual-threat quarterback.

Mullen mentioned the aptitude of Auburn’s defensive front and how disruptive they can be, and for good reason. The Tigers’ defensive line has earned three consecutive SEC Defensive Lineman of the Week honors so far this season.

“They’re always very, very sound in what they do,” Mullen said. “They’re gonna be very aggressive. He’s [defensive coordinator Kevin Steele] a good enough coach to be able to play to his strengths and put guys in position to be successful.”

He also noted the quality of Auburn’s roster.

The heated rivalry between Florida and Auburn is one that dates back to 1912. But it fizzled out when the teams stopped playing each other annually in the early 2000s.

Mullen, however, wants it to warm back up.

Lately, the head coach has been more vocal about how SEC games are scheduled.

“I think it’s an injustice for the kids,” Mullen told the Tampa Bay Times. “We should mix those games up, and you should play more teams from the West and get the opportunity to play more SEC games.”

ESPN College GameDay will be in town for the Gators-Tigers Homecoming showdown at 3:30 p.m. on Saturday. The program hasn’t visited Gainesville since October 2012, the last time two top-10 teams played in The Swamp.

Camille Woodhouse is a Sports and Media student at the University of Florida College of Journalism and Communications. In the past, she has covered the Atlanta Falcons and Florida Gators football for various sports news outlets. She is an Atlanta native and a fan of football.
@CJW_SportsRadio
Previous Dolphins Fall to Chargers for Fourth Straight Loss
Next 2019 MLB Playoff Picture