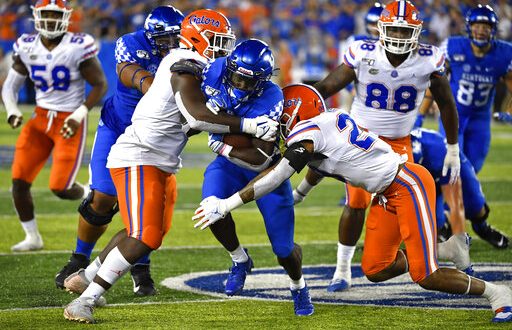 It looks to be a good old fashioned SEC slug out Saturday at 3:30 p.m. when the No. 7 Auburn Tigers take on N0. 10 Florida in Gainesville. The Florida defense has been a constant for the Gators and will need to slow down a very capable Auburn offense.

Auburn (5-0) is coming into Gainesville boasting an impressive resume through five games. The Tigers have defeated two top 25 teams (Oregon and Texas A&M) already. Their offense has posed problems for opposing teams on the ground especially, ranking fourteenth in the country in rushing offense.

Sophomore JaTarvious Whitlow has been leading the charge on the ground, averaging 5 yards a carry with seven touchdowns on the season. Florida defensive coordinator Todd Grantham has taken notice of Auburn’s ability to run the ball.

Auburn has also seen some good production from their freshman quarterback Bo Nix. Nix has seven touchdowns to just two interceptions on the year and is averaging 196 passing yards a game. Nix is also capable of running the ball. He’s second to Whitlow in rushing for the team with 215 yards. Grantham talked about how UF needs to play a dual-threat quarterback like Nix.

UF has the seventeenth ranked defense in the country and is also second in sacks with 24. Florida’s ability to put pressure on a freshman quarterback will be imperative to defend their home field.

Speaking of home field advantage, junior defensive lineman Kyree Campbell was adamant about how important it is for the home crowd to be loud when Auburn’s offense takes the field.

Campbell also mentioned that the defense wanted to hold Auburn to “three points or nothing.” A tall task for any defense.

Some familiar faces returning for Florida

Cornerback CJ Henderson, defensive lineman Jabari Zuniga and linebacker Ventrell Miller will all be returning from injuries on Saturday.

Mullen said the injured players — CJ Henderson, Jabari Zuniga, Ventrell Miller — will get reps this week and will be ready to play Saturday.

Florida will need all the bodies they can muster for this SEC matchup. Henderson is considered my many as one of the best cornerbacks in the country and fellow UF defensive back Trey Dean knows what kind of impact Henderson’s return can have on a team.

Previous Out In the Wild: Rays Look To Survive Against A’s
Next A Look at the Gators Offensive Line Ahead of Auburn