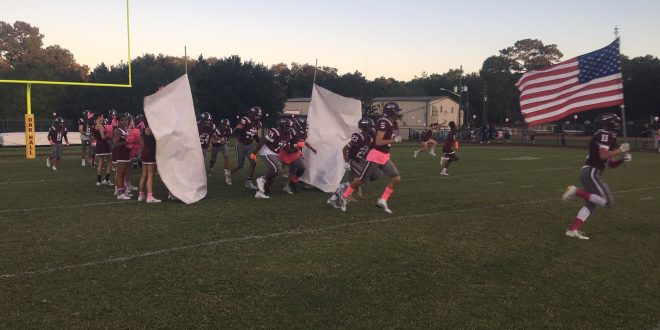 Oak Hall charges onto the field for its game against Bell on Oct. 4.

Friday’s high school football matchup between the Oak Hall Eagles and visiting Bell Bulldogs was rather one-sided. The game was over from Oak Hall’s first offensive play from scrimmage.

Sophomore quarterback Cole Gonzales took the ball and ran it 79 yards for a touchdown. The Eagles never looked back, winning 34-14.

“We were reading the end on that,” Gonzales said. “I just took it up the middle and it was wide open. That was amazing; to open up the game like that.”

Gonzales followed up his first big play with a second one. Freshman Jacarree Kelly created separation and brought in a well-placed pass from Gonzales for a 65-yard score.

“I saw the safety was flying left,” Gonzales said. “I looked off to the left and Jacarree came down and ran right by him and I just threw it over the top and let him go get it.”

Gonzales totaled two more touchdowns on the night; one rushing and one passing. Sophomore Ryan Nolan also had two scores for the Eagles.  Gonzales found Nolan on a quick slant that resulted in Nolan’s first score. Nolan followed that up with a rushing touchdown from the wildcat formation.

“Ryan’s a great help to this team,” Gonzales said. “Ryan’s an overall great athlete. He can do it all.”

The Bulldogs moved the ball down the field effectively but failed to score in the first half. Oak Hall’s defense made several fourth-down stops, even from deep within its own territory.

“They gained more yards than I would have liked,” said Oak Hall head coach RJ Fuhr. “We were a little bit bend but don’t break. We did come up with some big stops in the red zone.”

The lone points scored by Bell were in the fourth quarter. Senior Jonathon Neudert’s long touchdown run put the Bulldogs on the board.

“It’s good to get on the board and avoid the shutout,” said Bell head coach Joey Whittington said. “Neudert’s run the ball hard for us. We just need to score points.”

The highlight of the night for the Bulldogs was junior Isaiah Godden’s touchdown catch. Godden was in the right place at the right time, as the ball was tipped by senior tight end Zach Ford and found Godden’s waiting arms in the end zone.

“I’d like to say that’s just how we drew it up, but no,” Whittington said.

Oak Hall established a commanding 34-0 lead before penalties become a problem for the offense. Kelly, one of the Eagles’ dynamic playmakers, was ejected during the third quarter after his second personal foul.

“If you get two personal fouls, you get ejected,” Fuhr said. “It was chippy on both sides, but unfortunately if you get two you get tossed.”

Fuhr then made the decision to sit Nolan out during the second half. Nolan received a personal foul call earlier in the game, and Fuhr did not want to take any chances.

According to Florida High School Athletic Association (FHSAA) rules, a player must sit out the remainder of the current game and the next one if ejected. Fuhr wanted to avoid having another player unavailable for Oak Hall’s next game.

Bell (2-5) hosts Trenton (3-3) next week as they will attempt to build off of the momentum established at the end of the game.

“Our kids will always fight, Whittington said. “We just need to put ourselves in better situations early in the game.”