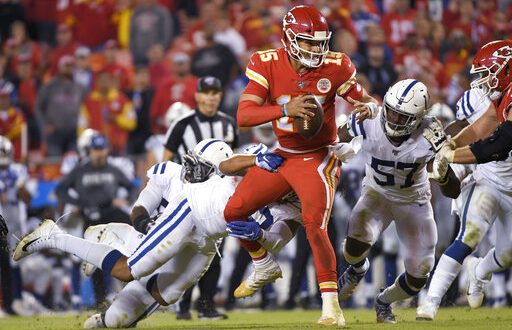 The Indianapolis Colts handed the undefeated Kansas City Chiefs their first loss on Sunday by a score of 19-13. The Colts accomplished something NFL teams have been trying to figure out how to: shutting down Patrick Mahomes.

Even though the Colts have had an average defense thus far this season, Indianapolis stepped up against the Chiefs. The Chiefs’ offense entered Sunday’s matchup averaging 29.6 points per game because of weapons like Travis Kelce and Sammy Watkins for Patrick Mahomes. However, the Chiefs were only able to put up 10 points in the first half.

Coming off an MVP season, Patrick Mahomes has continued his reign with 10 tds and 1510 yards this season entering Sunday’s Matchup. Mahomes was not able to find his same magic this week though, throwing for only one touchdown and a QBR of 91.8. The Colts heavily pressured Mahomes and sacked the quarterback four times.

Despite a struggling passing game, Marlon Mack and the Colts’ offensive line led the way on the ground. Marlon Mack rushed for 132 yards on 29 carries. Mack’s consistent rushing marched the Colts down the field in the fourth quarter to set up the field goal to give the Colts a two-possession lead over the Kansas City. Mack is currently number four in the NFL in total yards this season with 470.

Through all the struggles the Chiefs faced on Sunday, Patrick Mahomes kicked it into gear following an Adam Vinatieri field goal that gave the Colts a nine-point lead with 2:27 left in the fourth quarter. Mahomes led the Chiefs on a late fourth-quarter drive for a field goal with 1:16 left in the game to cut the Chiefs’ deficit to six points.

With no timeouts left, the Chiefs attempted an onside kick. The Colts recovered the kick to secure the upset victory.

With the win, the Colts move to 3-2 overall on the season and sit tied atop the AFC South with the Houston Texas. Heading into a bye week, Colts’ head coach Frank Reich explained why Indianapolis’ win was the best game of their season so far.

Following the loss, the Chiefs move to 4-1 overall on the season. They will ready themselves for a tough AFC matchup at home this week against the Houston Texans.

Previous Astros vs. Rays Game 3 Preview
Next Washington Nationals Fight to Avoid Elimination Against the Dodgers