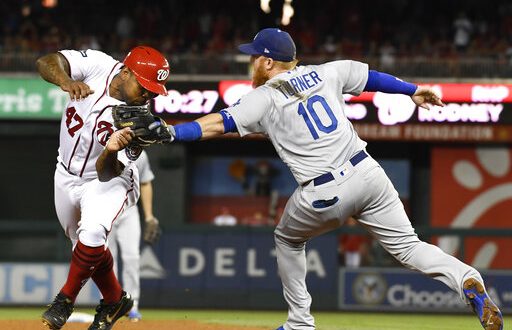 Washington Nationals Fight to Avoid Elimination Against the Dodgers

The Washington Nationals will try to avoid elimination when they host the LA Dodgers Monday night. The Dodgers are currently leading the five-game series 2-1 and are one game closer to making it to the National League Championship.

Both teams got a win in the first two games but the Dodgers took game 3 with a seven-run outburst in the sixth inning. This led the Dodgers to a 10-4 win and the series lead.

Dodgers third baseman Justin Turner said that their performance in the third inning drove them to up their batting execution.

On the other side of the ball, the Nationals were not as happy with the results in the sixth inning. Nationals manager Dave Martinez said that even though their performance was not lacking anything, they were not able to take control of the inning.

“It was frustrating. I mean, the 0-2 we couldn’t put the guys away, it’s tough… but some pretty good pitching you know. We had guys 0-2 and we just couldn’t finish them off tonight.”

Even though the Nationals did not get the ending they wanted in game 3, their focus right now is to win game 4 and have a chance to win the series.

The Nationals will try to redeem themselves Monday night. They will host the Dodgers and the first pitch is set for 6:40 pm. If a game 5 was necessary, the LA Dodgers would host the Nationals Wednesday at 8:37 pm.

RHP Max Scherzer is going to start for the Nationals as they try to avoid elimination. Scherzer pitched in one inning as a relief in game 2 of the series and was willing to start game 3. Martinez went with Anibal Sanchez instead, but he will now turn to Scherzer for this one.

As for the Dodgers, veteran LHP Rich Hill will take the mound first. Hill had a strong regular season as he recorded a 2.45 ERA in just 13 starts. He is not expected to pitch too many innings. He averaged just 4.5 innings per start on the regular season.

Hill was suffering from a knee injury the entire year but he has been slowly getting better. He is really close to being 100% healed. The last time he played, he recorded three scoreless innings that featured four strikeouts.

The winner of this series will move on to the National League Championship Series and face the winner of the Braves-Cardinals series.

Camila is a senior at the University of Florida studying Telecommunications with a specialization in production and a minor in Innovation. She is also seeking a Sports Management certificate. Camila is also WUFT's news director as well as a sports reporter/anchor.
@CamilaMaffuz
Previous Colts Hand Chiefs Their First Loss
Next Preview: Yankees Look to Close Out the Twins