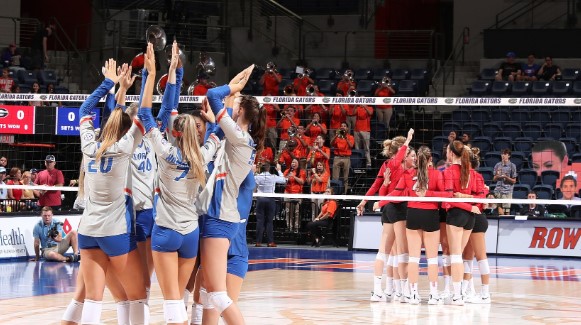 The Wildcats had Florida sweating, literally. With their high-powered offense and hot gym, Memorial Coliseum might as well have been a sauna.

The 12th-ranked Gators couldn’t close it out as they lose their first conference match of the year to number 15 Kentucky. After going up 2-1 on Kentucky, the Wildcats stormed back to take the match 3-2.

Florida’s winning streak stops at nine matches. Additionally, this was Florida’s first loss in a five-set match this season.

Not the result we wanted, but battled hard against No. 15 Kentucky.

Head coach Mary Wise said the team has deficiencies that were taken advantage of Sunday afternoon but the team competed hard after playing poorly in set one.

“This year we get a second chance,” she said. “So we’ll narrow the gap when they come back.”

Florida combined to hit just .130 on the match as a team. That’s Florida’s lowest hitting efficiency since the three-set loss to Stanford (.118).

Wise on the offense:

They had just 52 kills on 169 swings with 30 errors. Those error and attempt numbers surpassed Florida’s season highs of 23 and 163 against Dayton.

Also, Thayer Hall had her most amount of attempts since her 67 against Dayton. She had 17 kills on 65 swings for a .092 clip, which is her lowest output this season. But, her streak of matches with double-digit kills remains intact.

Wise said before the match that kills from the middle blockers would play a role. Senior middle Rachael Kramer was second on the team with 16 kills Sunday, but Darrielle King and Lauren Dooley combined for just three.

From one offense to another, Florida couldn’t fully corral the Kentucky attack. The Gators limited the Wildcats to hitting efficiencies of .089 and .098 in sets two and three.

However, Kentucky combined to hit .379 in the other three sets. That includes the first and last sets when they jumped out to huge leads to start the frames.

Wise said it was their block that kept them in the match for as long as they were.

Reigning SEC Player of the Year Leah Edmond led the Wildcats with 19 kills. Wise said what helps their offense is the ability of her and sophomore Alli Stumler to feed off each other. Both of them finished the match with double-doubles.

Wise on Kentucky’s offense early in the season:

Florida is on the road again for its next match. They face the Arkansas Razorbacks on Friday night. Arkansas enters the match losing three straight including two in straight sets.