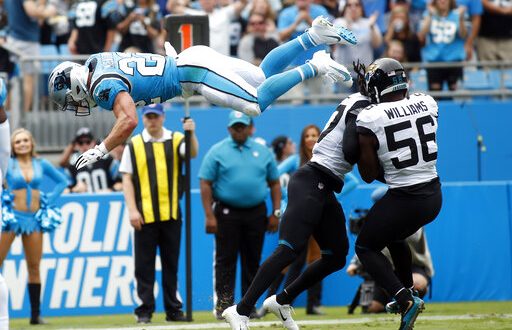 Carolina Panthers running back Christian McCaffrey (22) dives into the end zone for a touchdown during the first half of an NFL football game against the Jacksonville Jaguars in Charlotte, N.C., Sunday, Oct. 6, 2019. (AP Photo/Brian Blanco)

No Wins for Florida NFL Teams Over the Weekend

No wins for Florida NFL teams this weekend. The Jacksonville Jaguars and the Tampa Bay Buccaneers failed to win while the Dolphins’ bye week saved them from another loss. This is the second time in the season that Florida teams finished with no wins.

Minshew is now the first player in NFL history to throw for at least 200 passing yards with a passer rating of at least 95.0 in each of his first five career games. pic.twitter.com/JB6NJzieK3

The Jaguars came into Charlotte winning back-to-back games against the Tennessee Titans and the Houston Texans. But the Carolina Panthers put an end to Duval’s good run by outscoring them 34-27.

Quarterback Gardner Minshew completed 26 out of 44 passes for 374 yards and two touchdowns. The Jags’ running game was not up to par with the passing game. Running back Leonard Fournette ran for 108 yards in 23 attempts while Minshew amounted to 42 yards in seven attempts.

The Panthers’ passing game was nowhere near as good as Jacksonville’s. Second string quarterback Kyle Allen ended the night totaling 181 yards with one touchdown and a 56.7 passing completion. Nevertheless, it was their running game that won them the game. Running back Christian McCaffrey had his best performance of the season racking up 176 yards with two touchdowns. Reggie Bonnafon averaged 16 yards a carry in five attempts for 80 yards and a touchdown.

"As a defense we just have to play better as a whole. We have to be balanced and play more aggressive."

Tampa Bay’s loss against the Saints on Sunday brought fans back to reality after an eye-opening 55-40 win against Super Bowl LIII runner-ups, the Los Angeles Rams.

In the other hand, Saints quarterback Teddy Bridgewater had a field day. He finished with 314 yards and a 76.5 passing percentage. Backup quarterback Taysom Hill and even running back Alvin Kamara each completed one pass for 13 and 18 yards respectively. It wasn’t Kamara’s best night but he finished with 62 yards rushing in 16 attempts.

Figuring out a plan to make it big in the soccer scene in the U.S. or anywhere else in the world. For now, I'm having a blast writing for ESPN Gainesville and learning a lot from managers and students around the workplace. I'm covering the TV beat for Gators Soccer. What a team! Follow me on twitter: @J_AguerrevereUF
@@J_AguerrevereUF
Previous Gators Volleyball Drops Five-Setter to Wildcats
Next Astros vs. Rays Game 3 Preview