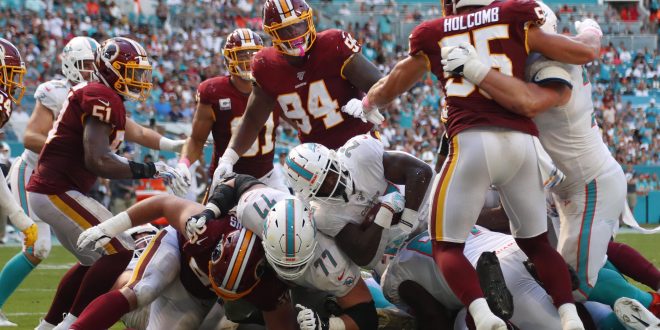 Miami Dolphins running back Kalen Ballage (27) scores a touchdown, during the second half at an NFL football game against the Washington Redskins, Sunday, Oct. 13, 2019, in Miami Gardens, Fla. (AP Photo/Wilfredo Lee)

Battle of the Bottom: Dolphins Fall to Redskins

It doesn’t get much better – or worse – than a matchup between the 32nd-ranked Miami Dolphins and the 31st-ranked Washington Redskins at home.

Battle of the Winless

Sunday’s matchup at Hard Rock Stadium showcased just how evenly matched the residents of the NFL’s depths were this weekend. The game was decided by a single point.

Washington entered the day at 0-5, while Miami entered at 0-4.

The Redskins and Dolphins both struggled to move the ball during a scoreless first quarter, but Washington pulled away in the third quarter and took a 17 to 3  lead into the fourth.

Fitzmagic Gets a Shot

Dolphins’ coach Brian Flores benched starting QB Josh Rosen for the veteran Ryan Fitzpatrick, hoping for some “Fitzmagic” of old. Fitzpatrick led the Dolphins to two touchdowns, which is the most Miami has scored in a game all season (and the first points they’ve scored in the fourth quarter all year). The first touchdown, on a rush from Kalen Ballage, capped a 55-yard, 9-play drive. The second came on an 11-yard TD pass to DeVante Parker with 6 seconds left in the game. However, it wouldn’t be enough, as Coach Flores opted for an ultimately unsuccessful two-point conversion in a shot to win the game. The Redskins prevented the comeback, edging out Miami 17 to 16.

Though it proved frustratingly fruitless, Fitzpatrick thought the conversion attempt was the best play for the situation:

As Kenyan Drake dropped the pass on the attempt, the Dolphins floundered away what may have been their best chance at a win this season. Had Drake caught it, the play would have likely been unsuccessful as unblocked Redskins defenders looked apt for the tackle.

Despite Fitzpatrick’s play, Coach Flores says he won’t be making a change at QB:

As for Rosen, Miami’s starting quarterback knows he has to do better:

The Dolphins, now 0-5, head to Buffalo next week to play the Bills at 1 p.m. on Sunday.