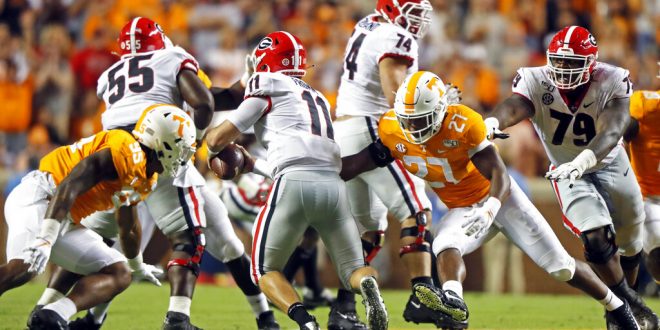 Georgia Looks to Right the Ship vs. Kentucky

The Georgia Bulldogs are coming off of a big loss in OT against South Carolina last week.

The Bulldogs have been one of College Football’s best teams in the first half of the season, but after last week, they have a huge blemish on their record. Georgia lost a stunner to the South Carolina Gamecocks in double overtime, and their star quarterback was at the heart of Georgia’s problems.

For Fromm, his first three interceptions of the season came against South Carolina, game six of Georgia’s season. And all three were intercepted by the same man: Israel Mukuamu. One thing’s for sure, Jake Fromm is happy Mukuamu didn’t transfer to Kentucky. That kind of play is unlikely to continue, as Fromm is a star in College Football.

Despite the loss, Georgia Head Coach Kirby Smart showed confidence in Fromm and his team after the game:

Georgia will look to put last week’s loss in the past when they host Kentucky tomorrow. With home-field advantage, Georgia is favored in the matchup. They are not letting a bad loss disrupt their routine, and Jake Fromm and kicker Rodrigo Blankenship will need to perform better if they want to win.

Georgia is favored by 25 points going into the game, so it should be a fairly easy win. The over-under is 46.5 points, which the Bulldogs would no doubt love to hit on their own to secure a win and get back on track. Kentucky will give Georgia an interesting look though, and that’s what they’d need to beat Georgia at home.

For Georgia, it’s as simple as playing to their strengths and not getting overwhelmed by what Kentucky will throw, or run their way. For Kentucky, it’s far from simple though.

Last week vs Arkansas, the Kentucky Wildcats pulled out a 24-20 win. But they didn’t do it in traditional fashion. Especially when you consider their quarterback last week is actually a wideout. Kentucky’s hand has been forced at QB, as their starter Terry Wilson has been out since Week 2 and will miss the rest of the season with a torn patellar tendon.

Coupled with poor play from their backup Sawyer Smith, the Wildcats are getting creative at QB. Usually a wideout, Lynn Bowden filled in at quarterback and completed 7 of 11 passes with 78 passing yards and a touchdown. He threw the ball well, but he really shined with his feet. Bowden carried the ball 25 times for 196 yards and two touchdowns. Bowden was a one-man wrecking crew against Arkansas, but Georgia won’t let that happen if they can help it.

Kickoff is at 6 p.m. tomorrow.

My name is Caleb Mikita, and I am a telecommunications major at the University of Florida from St. Pete, FL. I am a fan of all things sports, but my main passion is baseball. My long term goal is to become a sports analyst or writer for MLB Network.
@@caleb_mikita8
Previous Saint Francis Catholic Hosts Trinity Christian Academy in a Non-Conference Showdown
Next Winless Dolphins Travel to Buffalo with New Starting QB