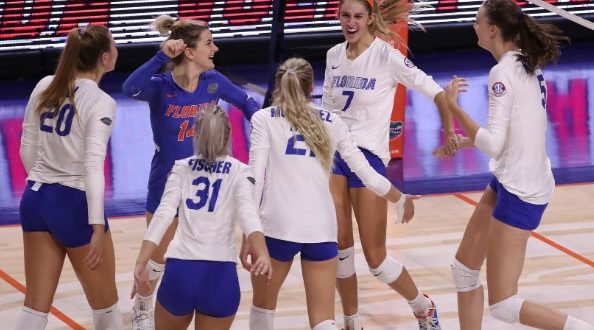 A pair of outside hitters helped keep Gators volleyball on a roll on the bayou.

The 13th-ranked Gators swept LSU in Baton Rouge on Sunday for their fourth straight win. Florida took each set by at least four with 25-20 in the first, 25-20 in the second and 25-21 in the third.

“To beat them 3-0 as well as they’ve been playing, that was a really good win for the Gators,” head coach Mary Wise said.

Hall and Carlton Lead the Offense

Florida saw great offensive performances from outside hitter Thayer Hall and right side hitter Holly Carlton. Unsurprisingly, Hall had a team-high 18 kills on 42 attempts for a .310 clip. She was one dig away from a double-double.

Carlton did more with less. She had an efficient 12 kills on 19 swings with four errors for a .421 hitting efficiency for the match. Her 14 points trailed only Hall’s 18.5 for the match.

Wise said Carlton got good looks in the match, as is usual for right side hitters, and played terrific on offense.

“Taylor Bannister had a very impressive performance,” Wise said. “She’s a special talent and we are a better team from having played this LSU team.”

Gators Serving It Up

It might not have shown up in the way of aces, but the team’s service game played a key factor in Florida’s win. In terms of service aces, the Gators posted four opposed to one error.

Carlton had two of the aces with senior Morgyn Greer and sophomore Marlie Monserez pitching in one apiece.

A pivotal service run by Greer in a second set tied at 18 allowed Florida to pull away to 23-19 and eventually win the set 25-20.

Greer and Paige Hammons combined at the service line to create a 6-1 run that helped Florida overcome a 7-4 deficit early in the third set.

.@holly_carlton2 throws one down & we've got set point! #GoGators pic.twitter.com/EbEYTs3vNg

Wise said Greer provides the Gators with a dependable server while Chanelle Hargreaves is still being held out.

“There were three different timeouts called on her service run and she had great serves following all three,” Wise said. “I love it that a senior, with very little experience in that, has embraced that role for us and (is) making us better.”

Wise’s squad returns to the O’Connell Center for a two-match home stint facing Alabama on Friday and Tennessee on Sunday.

Wise on having the week leading up to the match:

She said coaches will begin to re-evaluate their team and see if they can reach another gear over the next couple weeks. For Wise, her team most definitely can. It’s what makes going to work fun.