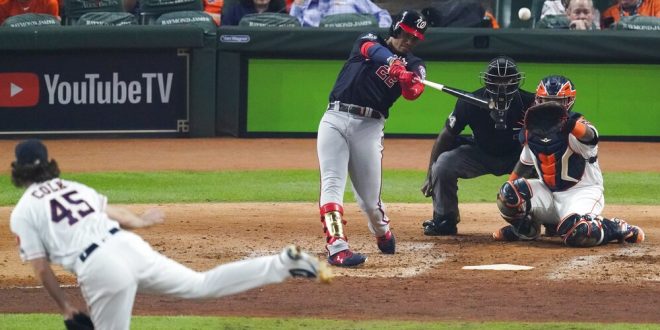 Washington Nationals' Juan Soto hits a home run during the fourth inning of Game 1 of the baseball World Series against the Houston Astros Tuesday, Oct. 22, 2019, in Houston. (AP Photo/Eric Gay)

Game 1 of the World Series between the Washington Nationals and Houston Astros is in the books. After giving up two runs in the first inning in Minute Maid Park, the Nationals rallied to come back and fended off the hosts to take the first game 5-4.

Max Scherzer got the start for Washington. His numbers in October leading up to the game looked pretty good. In three starts, he had three wins, and in 20 innings pitched, he allowed four runs.

Scherzer continued his postseason form in Houston in Game 1, but he didn’t get off to an ideal start.

In the first inning, Scherzer’s first two batters he faced reached base. He walked George Springer on seven pitches, then gave up a single to Jose Altuve.

Scherzer made up a bit of ground by striking out back-to-back batters, but thanks to a wild pitch, Springer and Altuve advanced. Yuli Gurriel then stepped up and smacked a two-run double.

Scherzer struck out Carlos Correa, but the former champs had a significant advantage after one.

After the first inning, Scherzer found his groove and kept the Astros away from home plate for the rest of his tenure on the mound. He’d go five innings, allowing two runs, five hits, three walks and picked up seven strikeouts.

Meanwhile, Gerrit Cole took the mound for the Astros. Like Scherzer, Cole was 3-0 as a starter in October coming into the game. His numbers, however, were much better. In 22.2 innings, Cole only allowed one earned run.

The Nats climbed their way back into the game via the long ball. Ryan Zimmerman got them started in the second with a solo shot to straightaway center. Two innings later, Juan Soto hit a dinger to left-center field to bring the score to 2-2.

We're still in awe of the size of this Juan Soto blast. #WorldSeries pic.twitter.com/jVx5oidbCe

The real damage came in the top of the fifth where Cole allowed three hits, a walk and three runs. At this point, Houston, once having led the game 2-0, now trailed 5-2.

Springer tried his best to get the Astros back into the game. In the seventh, he hit a solo homer to make it 5-3, and in the eighth, he hit an RBI-double to bring Houston within one. However, it wouldn’t be enough. The Nationals held off the late surge to take the first game of the series.

Houston manager A.J. Hinch said that Soto was the deciding factor of Game 1.

Game 2 of the World Series will stay in Houston. First pitch is set for 8:07 Wednesday evening.