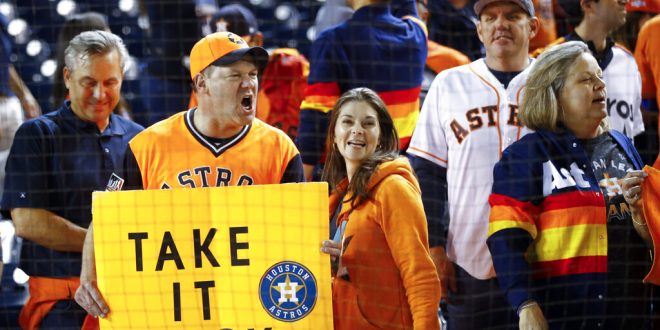 Houston Astros fans cheer after Game 5 of the baseball World Series Washington Nationals Sunday, Oct. 27, 2019, in Washington. The Astros won 7-1 to take a 3-2 lead in the series. (AP Photo/Patrick Semansky)

Another Gerrit Cole start, another W for the Astros.

The Houston Astros defeated the Washington Nationals 7-1 in Game 5 of the World Series behind a strong Gerrit Cole pitching performance for a third straight Houston win.

Despite struggling Game 1 of the World Series against Washington, Cole was back in his bag Game 5, allowing only one run and three hits in seven innings pitched. Cole also struck out nine batters on the night.

For the 3rd straight game, the @astros took care of business on the road!

Rewatch the best moments in this #October60! pic.twitter.com/WheXg16Pz7

In the second inning, Houston got on the scoreboard first with a two-run 405 foot bomb from rookie left fielder Yordan Alvarez to give Houston a 2-0 lead. Alvarez was on fire, going 3-3 with two singles following the homer. Not only was he hot in the win, but Alvarez has been on fire in the World Series with a batting average of .545.

Two innings later, shortstop Carlos Correa homered with Alvarez on base off a slider from Nationals starting pitcher Joe Ross. The home run gave the Astros a 4-0 lead.

After an impressive 17 runs combined in Games 1 and 2, the Nationals have gone ice cold hitting in the World Series. After only scoring one run in Game 3 and Game 4, the Nats’ batting schlump was brought into Game 5.

The Nationals only wracked up four hits and a run off a seventh inning solo home run from Juan Soto. Astros pitching struck out 11 of Washington’s batters.

Off Gerrit Cole in the #WorldSeries

On the Board Late

Late in Game 5 of the World Series, Astros add some padding to their sizeable lead. At the top of the eighth inning, Yuli Gurriel hit an RBI single to score Springer and give Houston 5-1 lead.

At the top of the ninth inning, Houston finished off the Nats with a two-run George Springer home run. Springer had himself quite a day going 2-3 with two RBIs and two walks. Astros finished the game with an impressive 10 hits off a dominant Washington pitching rotation.

Following three straight wins in Nationals Park, the Astros will now head back to Houston to host the Nationals in Minute Maid Park for Game 6 of the World Series. Ace pitchers Justin Verlander of the Astros and Steven Strasburg of the Nationals will face off on the mound in Houston. Despite total regular-season dominance, Justin Verlander has struggled in past World Series starts holding a current career record of 0-5

Houston manager AJ Hinch commented on the confidence Astros have in themselves moving forward in the World Series. 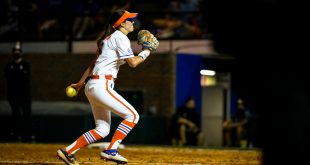 The Houston Astros had gotten off to a strong start this season, but have become …