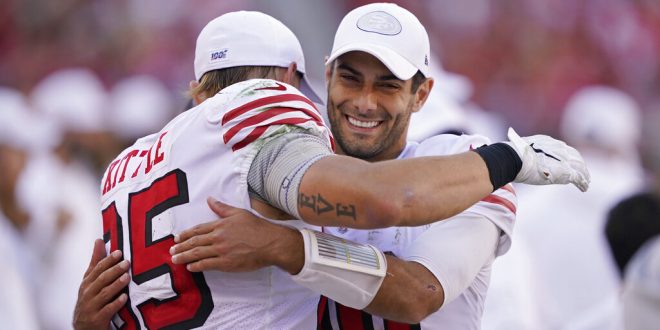 Best Defense in the League

San Francisco currently has the top defense in the league, only allowing 224.4 yards per game. They are second in points allowed, letting up an average of 11 points per game.

Their defensive ends have had 27 sacks so far this season. Arizona is an exploitable matchup, as the Cardinals have allowed quarterback Kyler Murray to be sacked 27 times in the past eight games. With these numbers lined up against each other, it looks like the 49ers could be upping their sack stats this game if the Cardinals’ offensive line continues to allow the defense to break right through.

With defensive stats this impressive, Murray will have to be quick enough to not lose yards from sacks, yet accurate enough to not give San Francisco opportunities for easy interceptions.

Arizona’s Kyler Murray has racked up 1,988 passing yards, compared to San Francisco’s Jimmy Garoppolo, who has only 1,498 yards this season.

Murray was drafted first overall by the Cardinals in the 2019 draft and is making a name for himself in the NFL. He has thrown seven touchdowns and has rushed for two, which can become another offensive threat to the 49ers defense. Murray averages 5.5 yards per rush and has rushed 16 first downs. If Arizona’s quarterbacks coach Tom Clements can keep his quarterback moving and keep the defense guessing, Murray will have holes on the field for quick passes or rushing opportunities.

This is Garoppolo’s first full season with the 49ers, after his ACL injury during week 3 of the 2018 season. His pass completion rate is at 69.8%, but he has thrown seven interceptions this season. He has only rushed for 84 yards so far, but head coach Kyle Shanahan says he thinks Garoppolo will continue to grow as he gets more touches on the field to increase his confidence.

The 49ers have been relying more on their running game while they help get their quarterback more comfortable on the field, and their stats prove that this tactic is working. With a team total of 1,268 yards, they are third in rushing yards in the league, and they have scored 13 rushing touchdowns.

However, the Cardinals are not far behind them in this part of the game. With a total of 932 rushing yards, Arizona is ninth in the league. With their newest addition from the Miami Dolphins, Kenyan Drake, Arizona could be looking at a new threat to move the ball on the ground this game.

Overall, the Cardinals will need to protect their quarterback and rely on their offensive line to prevent easy opportunities for sacks. It looks like the 49ers should pull through this Halloween game and end October remaining one of the last two teams in the league with an undefeated record this season.