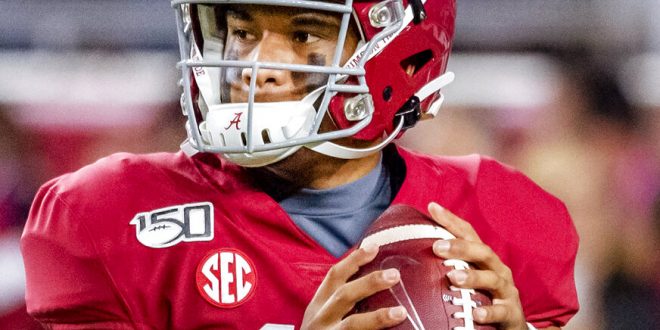 FILE - In this Oct. 19, 2019, file photo, Alabama quarterback Tua Tagovailoa (13) warms up before an NCAA college football game against Tennessee, in Tuscaloosa, Ala. The SEC hasn't had a quarterback picked in the first round of the NFL draft since Johnny Manziel in 2014, and the league has never had more than one quarterback taken in the first round. It appears that's about to change, as Tua Tagovailoa, Joe Burrow and possibly Jake Fromm could make the next draft the best ever for SEC quarterbacks. (AP Photo/Vasha Hunt, File)

Alabama and LSU Get Bye Weeks Before Top-Seeded Clash

It’s been eight years and eight games since No. 1 LSU’s football program was last able to beat No. 2 Alabama.

That edition of this colossal SEC match up back in 2011 finished 9-6 from Tuscaloosa. Since then, Nick Saban’s teams have outscored LSU 193-73. Now, both teams, as well as No. 3 Ohio State, receive an extra week of rest and preparation for arguably their biggest game of the season.

While both teams will indeed be out of action this Saturday, it’s expected that both will still retain the top two seeds in the country by the time Nov. 9 arrives.

There will be plenty at stake. The winner of this monumental showdown will undoubtedly determine the best football team in the nation. However, fanatics of college football will have to wait another 9 days before the country’s top-seeded football programs collide.

Senior QB Joe Burrow is currently leading junior QB Tua Tagovailoa and the remainder of the pack in passing yards. Tagovailoa is leading the pack in total QBR. Both these offenses also possess some unbelievably talented skill players.

The top four receivers in the nation in regard to passing yards all play for these two programs. LSU’s Justin Jefferson and Ja’Marr Chase, and Alabama’s DeVonta Smith and Jerry Jeudy are all electrifying talents that will likely impact this contest’s result.

Running the football hasn’t been difficult for these two teams either. Both their starting tailbacks, Alabama’s Najee Harris and LSU’s Clyde Edwards-Helaire, are averaging 5.94 yards per carry on the season.

Despite the evident success both these teams have enjoyed during the first eight games of the season, Saban was rather modest when discussing his team this week.

The Crimson Tide and the Golden Tigers are still dangerous on the defensive end as well. Alabama is allowing fewer points per game to opponents this season than the Tigers are (15.2 to 20.9).

Frankly, these programs’ offenses both have the ability to bury an opposing defense. The offense that can remain more lethal and composed in the face of another tough SEC defense will likely come away victorious.

Orgeron spoke about keeping his team calm throughout the slow buildup to the contest on Nov. 9.

The Golden Tigers are coming off an impressive 23-20 home victory over Auburn last week. Meanwhile, Alabama blew out Arkansas 48-7.

Charlie Strong owns quite the résumé in regards to his college coaching career. However, the …