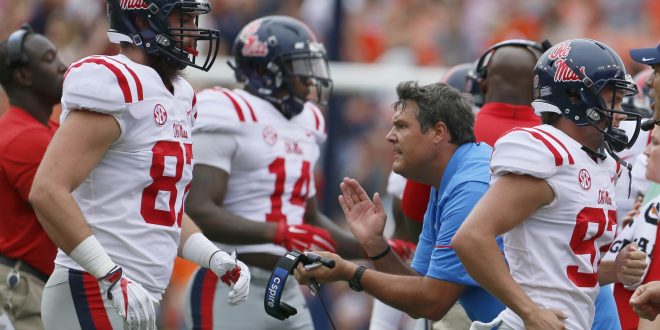 Ole Miss ranks fourth in the SEC in total offense this season. The Rebels have averaged 434.1 yards per game in eight contests.

Auburn’s ferocious defense, led by its front seven, has allowed 17.9 points per game. That’s fourth-best in the SEC.

Here’s what to look out for when these two units clash at Jordan-Hare Stadium.

Ole Miss has rushed for at least 200 yards in four-straight games. Fourteen of those runs have gone for 30 yards or more, the most in the country.

If you’ve watched big plays in Ole Miss games this season, they were probably made by a freshman.

Ole Miss freshmen have accounted for 84.5% of the Rebels’ total offense, tops in the NCAA.

The Tigers have registered 23 sacks in eight games, only behind Florida’s 29.

Davidson has notched five-and-a-half sacks, which leads the team. Brown has four.

Davidson’s and Brown’s dominance in the trenches should bode well for Auburn’s defensive performance.

Plumlee will have to rely more on his arm than his legs to make plays, and Ealy will have trouble ripping off his trademark big gains.

Saturday will mark the 44th meeting between Ole Miss and Auburn, with the first matchup coming in 1928.

Auburn has dominated Ole Miss throughout the years, leading the series 32-10 (the series tally used to be 32-11 before Ole Miss’ 2012 win was vacated by the NCAA).

The Tigers are 15-3 all-time against Ole Miss at Jordan-Hare.

After its matchup with Auburn, Ole Miss will return home to face winless New Mexico State (0-8) on Nov. 9 at 4 p.m.

Auburn will get some rest during a Week 10 bye before the second game of its four-game homestand against Georgia on Nov. 16. Kickoff time is TBD.