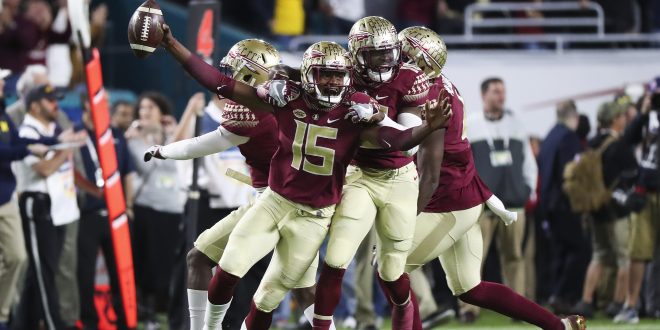 For only the second time since 1976, the Florida State Seminoles will be on a head coaching search. A vacancy is now open for one of the more attractive head coaching jobs in the southeast with Willie Taggart now fired.

The decision to fire Taggart comes at a cost. The university will reportedly owe their former coach $18 million for his buyout for being fired prematurely. However, it’s a decision that athletic director David Coburn feels was necessary. He feels that firing Taggart before the season ends gives him a hiring advantage.

FSU will turn to Odell Haggins to be the interim head coach for the remainder of the season. Haggins has been on the FSU coaching staff for 26 seasons and served as the interim coach when Jimbo Fisher left for Texas A&M in 2017.

For the remainder of the season, Haggins is hoping to restore the level of character the program is used to.

Who Will Be the Next Head Coach?

Coburn said he hopes to have a coach hired before the season ends. The difficult part about this is most of the candidates that FSU would go after will still be playing. Here are some of the potential candidates that the ‘Noles may go after:

This is the most likely hire and would be the best hire. But Stoops currently has a head coaching spot in the XFL, which starts in February. Stoops has the best track record of probably anyone that FSU could hire. H coached at Oklahoma for 18 seasons and never had a losing record. He beat FSU in the 2000 national championship game with the Sooners and won nine Big 12 titles before stepping down in 2016.

A report that came out late Monday night said that FSU was nearing a potential deal with Stoops, but nothing is confirmed.

Just an update to my earlier tweet about Stoops coming on at Florida State:

I've heard the announcement could come as early as the end of this week. With keeping Briles on as OC, it could turn into a HCIW role. Stoops is 59, would want to groom a successor before he retires. https://t.co/8o4yYHqOzh

As we reported earlier Bob Stoops is in Tallahassee finalizing a new deal. My sources telling me Kendall Briles remains OC, Jim Leavitt DC. That’s a helluva triumvirate right there. Leavitt and Stoops worked together at Kansas St. Tons of experience and a winning records!! pic.twitter.com/ofNIj42I63

However, there is some doubt that Stoops wants the job. According to ESPN and SEC network radio host Paul Finebaum, Stoops would only be interested in coaching Notre Dame if he was offered the position.

This would be a trendy hire. Fleck has guided the Minnesota Golden Gophers to an 8-0 record this season and has them 13th in the AP poll. He’s now in his third year at Minnesota and is 20-13 during his tenure.

Fleck has revamped the culture and attitude in Minnesota. He is on pace to give the Gophers their highest win total since 2016 and could possibly give Minnesota its first 10-win season since 2003.

However, his contract runs until 2022 and he is apparently in talks to sign an extension with the Gophers. It doesn’t appear Fleck is going anywhere.

The brother of Bob Stoops and the current head coach at Kentucky has been a name thrown around often. Stoops has been able to succeed, by Kentucky standards, as the head coach of a school where football is second.

He gave the Wildcats their first 10-win season in over 30 years in 2018 and has been able to recruit at an extremely high level. His tough, gritty coaching style may be exactly what FSU needs.

This is a dark-horse candidate. Campbell has had success at an Iowa State program that has truly never known what consistent winning is like. He is currently on pace to give the Cyclones three straight winning seasons for the first time since 2000-2002.

Campbell currently has the highest betting odds (3/1) according to Bet Online to land the FSU job. However, Campbell seems content coaching at Iowa State for now, but then again, Vegas usually isn’t wrong.