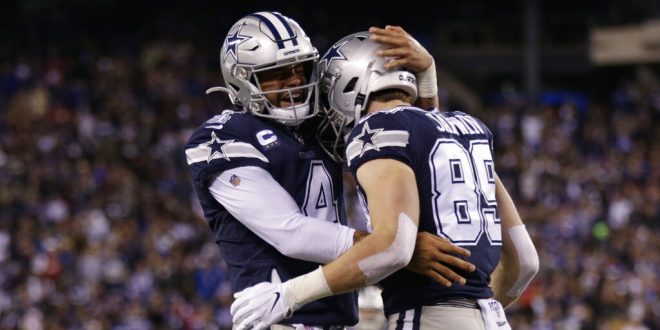 A black cat ran onto the field as the Halloween scares hit the New York Giants late. Turns out, that was just the sign that Dallas needed as the Cowboys defeated the Giants 37-18 on Monday Night Football.

On the first play from scrimmage, Dak Prescott threw an interception to set up an early field goal for the Giants. Late into the second quarter, the Cowboys struggled to move the ball on offense falling behind 12-3. Usually a sign of bad luck, a black cat running on the field turned the tides for the Cowboys.

No matter what else happens in this game, the black cat wins the night… pic.twitter.com/WYYf3WmYCe

Dallas would take the lead, scoring 10 points in the final two minutes of the first half. A 42-yard touchdown to Blake Jarwin was the momentum swing the Cowboys needed to get back in the game.

Dallas took a 16-15 lead into the fourth quarter and would take full control from there. Two touchdowns from Prescott, one to Amari Cooper and the other to Michael Gallup, put Dallas up and they didn’t look back. A 63-yard fumble returned for a touchdown sealed the night’s fate. Listen to what Jerry Jones had to say on his team’s toughness.

Prescott finished 22/35 for 257 yards, three touchdowns and the early interception. He continues to improve his play as talks of a new contract loom over him. Rookie Daniel Jones struggled in his seventh career start for the Giants. Jones finished 26/41 with a touchdown and an interception. He also lost two fumbles as the Giants dropped their fifth consecutive game. Here’s what he had to say after the game.

Daniel Jones now has 16 turnovers this season, tied with Jameis Winston for most in the NFL. pic.twitter.com/Fjf3TeNJFX

This game featured two of the best running backs in the league, Ezekiel Elliot and Saquon Barkley. Although, only one of them actually made it look that way. Elliot was eating all night long, not really running for big plays, but kept the ball moving for Dallas rushing for 139 yards on 23 carries. Barkley, on the other hand, rushed 14 times for 28 yards (two yards per carry). New York struggled to get the run game going as Jones was their leading rusher (54 yards on six carries). Cowboys Head Coach Jason Garrett was pleased with how his defense performed.

Dallas dominated in the trenches all night long. The Cowboys recorded five sacks on the night while hitting Jones another seven. On the other side, Dallas didn’t give up a single sack. Solid protection has been a theme all season as Prescott has been sacked just 10 times on the year.

Week 10 of the NFL season kicks off this Thursday in an AFC West showdown with the Oakland Raiders hosting the Los Angeles Chargers.

Up next for the Giants, they stay home to take on in-state rival the New York Jets. As for the Cowboys, they get to go back home as they host the Minnesota Vikings in a Sunday night matchup.