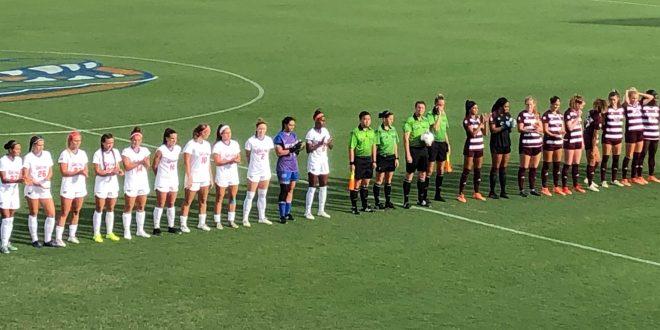 “Every season is a case of up and downs, it’s like a roller coaster… if we can get those lows out of the way earlier rather than later, then that’s fine,” commented Florida midfielder Parker Roberts on the Gators’ regular season.

And what a roller coaster it was.

A ride that started off very bumpy, with five straight road games, three of which were against top five teams. This was followed by a massive jolt in the form of a 2-0 home-opener loss to a winless UCF squad. Then, we could enjoy with our hands up as we glided to eight wins in nine games, until we saw the finish line. The Gators could not find a win in their last three games, and head into the SEC Tournament as the number five seed with a 10-7-1 record.

With the top 10 conference teams making it into the tournament, this means Florida is matched up against nationally ranked number 17 Texas A&M, who sport the number four seed in the bracket. The two teams face off Tuesday night.

Texas A&M (13-3-3) finished the regular season strong with three straight wins, including a victory over Vanderbilt, the number two seed. More impressive than that, though, is their personnel. The team boasts the SEC Forward of the Year, Ally Watt, and the SEC Midfielder of the Year, Jimena Lopez.

Watt, a senior, scored 14 goals this season, good enough for most in the conference. Lopez plays for the Mexican national team and registered 13 assists this season for the Aggies, which was the most in the SEC and tied for second in the country.

Florida head coach Becky Burleigh knows the strength of the A&M team and thinks a strong start for the Gators is crucial.

As Burleigh mentioned, the Aggies are a familiar foe to the Gators. The two played each other in early October in Gainesville, and the Gators won 3-1. Roberts, though, thinks this game will be very different than their first meeting.

Also, the Aggies were without Lopez in the October matchup, as she was with the Mexican national team.

Both teams come into this game on three days of rest.

What to Expect From the Gators

Florida has scored one goal in its last three games. To make matters worse, the goalscorer, Deanne Rose, will not be with the team during the SEC tournament since she has Canadian national team duty.

However, the Gators have plenty of fluid, quick forwards, like senior Vanessa Kara, who leads the team in goals, and freshman Kouri Peace. Both were named to the All-SEC second team and both are sure to see significant playing time.

Roberts, who is tied for second on the team in assists and was named to the all-SEC first team, highlighted what the Gators focused on in practice leading up to the tournament.

I'm a senior journalism student at Florida. I love sports, and I love covering sports. I'm one of the beat writers for the Gator soccer team right now, and if you follow me on Twitter @johnmiceli13 you'll never miss a soccer update
Previous Lamar Jackson Disproves Doubters in Upset of Undefeated Patriots
Next Cowboys Take Down Rival Giants on Monday Night