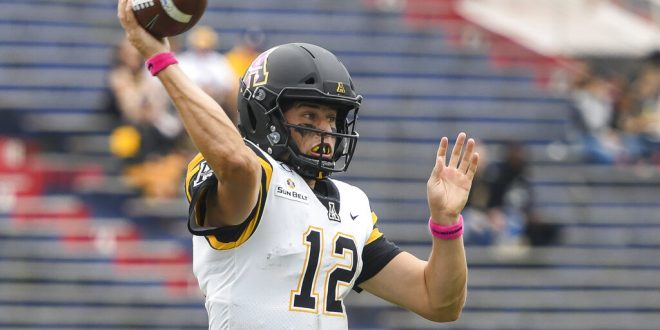 Appalachian State quarterback Zac Thomas (12) fires a pass down field against South Alabama during the first half of an NCAA college football game Saturday, Oct. 26, 2019, at Ladd-Peebles Stadium in Mobile, Ala. (AP Photo/Julie Bennett)

Appalachian State Looking for a Statement Win Over the Gamecocks

The date of September 1, 2007, will always be remembered by Appalachian State football fans. It was the day that the Mountaineers made their way to Ann Arbor and shocked the football world. To this day, it may go down as the greatest upset in college football history.

Appalachian State upset the Michigan Wolverines by a score of 34-32 that day. And they will look to upset another Power-5 school this Saturday when they head to Columbia, South Carolina to face the Gamecocks.

Appalachian State Looking to Bounce Back

The Mountaineers are coming off their first loss of the season. They fell 24-21 last Thursday night to Georgia Southern, their second time losing to the Eagles in as many seasons. The loss not only spoiled a possible undefeated season, it knocked the previously 20th-ranked Mountaineers out of the Top 25.

Despite the loss, Appalachian State is having a tremendous season, carrying a 7-1 record that includes an early-season upset over North Carolina in Chapel Hill. They also remain in first place in the Sun Belt Conference’s East Division.

South Carolina comes into this game having had a much different season. The Gamecocks’ bowl hopes are hanging by a thread as they sit at 4-5 with three games remaining. Having played three Top 10 teams this season, it isn’t very surprising that South Carolina has struggled. However, they did come up with possibly the biggest upset of the season when they traveled to Athens and knocked out the then third-ranked Georgia Bulldogs.

This game will perhaps be South Carolina’s most important of the season. With remaining tests against Texas A&M and Clemson, it is imperative that the Gamecocks find a way to come up with a victory on Saturday. A loss more than likely ends any hope for bowl eligibility this season.