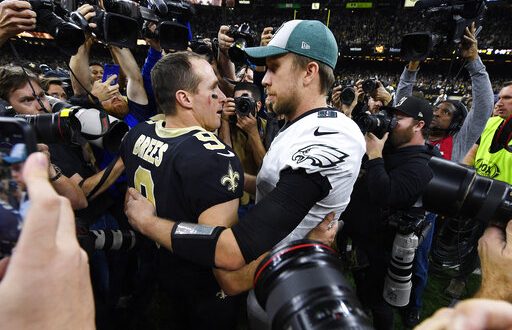 NFC teams that could make playoffs

With six weeks left in the NFL regular season, many fans are starting to look toward the playoffs. But in the NFC, there’s no six front runners set to move on. For lack of a better word, the NFC playoff picture looks like a mess.  There’s eight teams that could realistically still make the playoffs. But there’s only six spots available. That means these last weeks are going to be crucial for a number of teams. Let’s take a closer look at the NFC, and what the playoff picture could look like.

Right now, the Dallas Cowboys lead the East division. They currently sit at a 6-4 record and are led by quarterback Dak Prescott. Right now, Prescott has over 3,200 passing yards on the season – the most in the NFL. He also holds 21 touchdowns. Here are from his stats from last week.

444 passing yds: Most of any @NFL QB this week ✔️
Tied Tony Romo for most 400 passing yd games in a single season in #DallasCowboys history ✔️#NextGenStats fueled by @Gatorade | @dak pic.twitter.com/fBv8pCxb70

Right now, they would be in the playoffs – but they need to make sure they continue a high level of play, because the Philadelphia Eagles are right behind them. The Eagles are 5-5 and if they can win the rest of the year (keeping in mind the Cowboys start losing), it would make for a very competitive NFC East.

A big test for the Cowboys will come this weekend when they face the talented New England Patriots Nov. 24.

There are two talented teams highlighting the North: the Green Bay Packers and the Minnesota Vikings. Green Bay is 8-2, with one of those wins coming against the Vikings. Quarterback Aaron Rodgers has shown his experience this season, throwing 17 touchdowns and just two interceptions. As they come off their bye week, the Packers face another top opponent in the NFC this Sunday in the San Francisco 49ers.

Packers head coach Matt LeFleur talked about what this game may look like against this top-rated team.

But, there’s still the Minnesota Vikings, who are second in the division. If the season were to end today, they would have the sixth seed. They’re undefeated at home, and running back Dalvin Cook has already tallied over 1,000 rushing yards on the year. ESPN gave the team a high percentage to make the playoffs.

Right now, the NFC South has a pretty clear leader in the New Orleans Saints.

They’re 8-2, and the next closest team in the division is the Carolina Panthers. They’ve scored some big wins against the Seattle Seahawks and the Cowboys already. And the wins have come with an injured Drew Brees. Teddy Bridgewater has been getting playing time along with Brees, and hasn’t disappointed any fans. He’s thrown nine touchdowns this year.

They still have to face the 49ers in early December, but even so, it seems evident that the Saints won’t have to settle for a wild-card round and that they’ll most definitely be in the playoffs.

This is where things get the messiest. The West sees the San Francisco 49ers, the Seattle Seahawks and the Los Angeles Rams all with winning records. The 49ers sole loss was in a Monday night overtime thriller to the Seahawks.  Some have criticized the 49ers for lack of a tough schedule, so they’ll need to prove themselves in upcoming match-ups as the season comes to a close – with some huge games against the Saints, Green Bay, and the talented Baltimore Ravens.

Defensive end Nick Bosa says the team is ready for those challenges.

Meanwhile, Seattle has just two losses on its record. Quarterback Russell Wilson has the most touchdowns in the league at 23 this year. They still face the Vikings and the 49ers one final time this season. They’ll need to continue to win in order to be competitive for a playoff seeding, and avoid a wild-card game. This week, they face the Eagles.

While it’s unlikely the Los Angeles Rams will make the playoffs, there’s still a slight chance they could. They are 6-4 and if they keep winning, and if the Seahawks or 49ers start losing, it could create an even messier playoff picture.

Right now, it’s clear that the NFC has some very talented teams and it’s unclear what the seeding will be come playoff time. But one thing is clear: it’s going to be a fun six weeks of NFL football, especially in this division.

Previous Bucs, Winston Holding on a By a Thread
Next Browns moving forward in absence of Myles Garrett

“Oh no, oh no!”  That was Cowboys’ legend Tony Romo’s reaction to Dak Prescott’s injury …