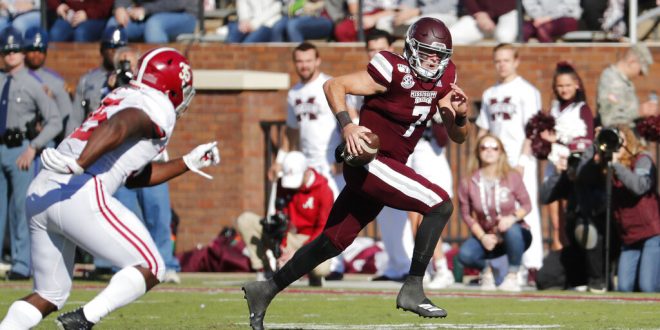 Mississippi State quarterback Tommy Stevens (7) is pursued by Alabama linebacker Shane Lee (35) as he runs for a first down during the second half of an NCAA college football game in Starkville, Miss., Saturday, Nov. 16, 2019. Alabama won 38-7. (AP Photo/Rogelio V. Solis)

Following last week’s 38-7 defeat to No. 4 Alabama, the 4-6 Mississippi State Bulldogs welcome the 5-6 Abilene Christian Wildcats. It’s the Bulldogs’ only non-major matchup and the Wildcats’ only Power-Five matchup of the season.

The meeting marks the second time in Mississippi State football’s 115-year history that the program faces off against a school from the Southland Conference. The first matchup was against the Lamar Cardinals in 1974 when the Bulldogs defeated the Cardinals 37-21.

Despite a 4-6 season that included a four-game losing streak, the Bulldogs are not short of playmakers. Wide receivers Osirus Mitchell and Stephen Guidry have combined for nine touchdowns and 673 yards. Running back Kylin Hill has 1,062 rushing yards, the most in the SEC, accompanied by ten touchdowns. However, Hill injured his lower body against Alabama and his status is uncertain for the Abilene Christian game.

Kylin Hill and Deddrick Thomas are both day-to-day with upper and lower body injuries, respectively.

The quarterback situation has also not been clear this season for Mississippi State. Quarterbacks Garrett Shrader and Tommy Stevens have split reps with the starters, though Shrader played only one snap against the Crimson Tide last week. The two have combined for 1,791 passing yards, 14 passing touchdowns and ten interceptions. The duo has also contributed for a combined 725 yards and five touchdowns on the ground.

Joe Moorhead on Garrett Shrader and Tommy Stevens: "We're going to need both of them as we have all year."

He calls Stevens and Shrader QB 1A and 1B, in no particular order.

As for Abilene Christian, running back Tracy James has rushed for 846 yards and 14 touchdowns, the second-most in the Southland Conference. Tracy also has five receiving touchdowns, which makes him the highest-scoring non-quarterback in the conference.

On defense, defensive linemen Temisan Kuyatsemi and Kameron Hill have combined for 15 sacks, while linebacker Jeremiah Chambers leads Southland in tackles for loss with 19.5. The trio is a key reason why the Wildcats have allowed the fourth-fewest rushing yards and rushing touchdowns in the conference.

Mississippi State faces Abilene Christian in Starkville, Mississippi, on Nov. 23rd at 7:30 p.m. on SEC Network. The game can also be streamed live on fuboTV.