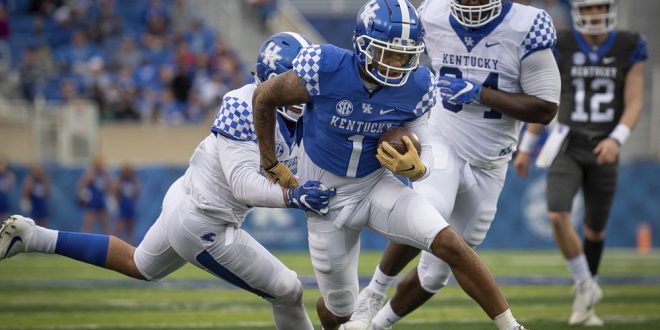 Kentucky Up Against Familiar FCS Team

The Kentucky Wildcats are a win away from qualifying for a bowl game. All of their wins so far have been against FBS opponents, so a win over the upcoming FCS opponent would get the job done.

The upcoming opponent should look familiar to SEC fans; it’s the UT Martin Skyhawks. If this team sounds familiar, it’s because the Florida Gators shut out the Skyhawks in week two of the regular season. It may look like an easy win for Kentucky, but UT Martin isn’t the same pushover that it was a year ago.

After a dreadful 2-9 (2-6 OVC) 2018 season, the Skyhawks turned their team around. They enter the matchup against Kentucky with a 7-4 record.

Regardless, Kentucky is getting its fans ready for the game on Twitter:

How Do These Teams Stack Up Against Each Other?

Kentucky should still be able to combat the Skyhawks on defense as well. They are 22nd in all of the FBS in opponents points-per-game (20.10). UT Martin is ranked only 63rd in all of FCS, but they average 27.3 points-per-game. Keep in mind that an SEC team is being compared to an FCS team, but, again, UT Martin didn’t accomplish these numbers magically.

Florida did shut them out, but Florida also shut out no. 20 Towson and Vanderbilt. Kentucky defeated Vandy as well, and, for the most part, have defeated teams they were supposed to beat. The only exception was the loss to Tennessee, but they made up for it with a win over Mizzou.

The ESPN Football Power Index gives Kentucky 96.6 percent chance to win against UT Martin. However, if they underestimate the team they play, they could become the fourth FBS to lose to an FCS team this season.

Harrison is a sports coordinator at ESPN 98.1 FM/850 AM WRUF. He served as a beat writer for Florida Gators football for the 2019 and 2020 seasons. He also contributes to WRUF's Gainesville Sports Center segments and makes appearances on the Clash on Harp on Sports. Harrison has been a content writer for WRUF since January 2019 as well.
@HarrisonSmaj
Previous No. 1 LSU takes on Arkansas
Next Mississippi State Takes On Abilene Christian