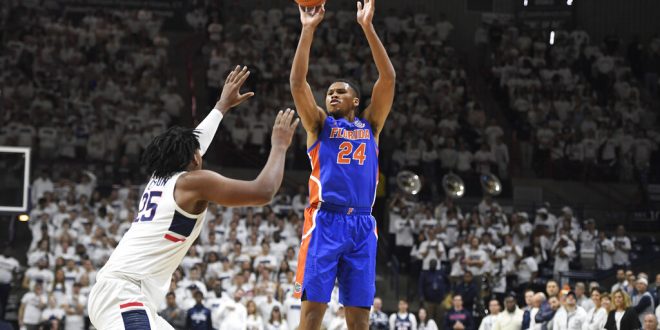 The Florida Gators men’s basketball team travels to the Charleston Classic Tournament on Thursday for a three-game stretch.

The Charleston Classic is an eight team tournament in Charleston, South Carolina that started in 2008. This is Florida’s first time participating, and there are some familiar faces in this year’s tournament.

The eight teams participating in the tournament include Missouri State, Miami (FL), Florida, St. Joseph’s, No. 18 Xavier, Towson, Buffalo and UConn. Florida played both UConn and Towson already this season, losing to the Huskies 62-59 and defeating the Tigers 66-60.

Injury-wise, Tre Mann is day-to-day in concussion protocol after taking an elbow to the head against Connecticut, according to head coach Mike White.

Once the Associated Press Top-25 list came out this week, the Gators found themselves looking from the outside in. Florida started the 2019-2020 season ranked sixth, and was considered by many analysts to be contenders for the national championship this season.

Florida coach Mike White says he has handled the hype poorly and wants to change the team’s mindset.

“The body language, the lack of confidence, the ‘Oh, no, the sky is falling look’ on some of these guys’ faces lets me know that [the hype] definitely has affected us,” White said. “It definitely has, so where do we go from here? Let’s talk about it. I’m changing philosophies on that today.”

According to White, the shooting issues come from a variety of factors. Shooting tired shots, shot selection, tempo and confidence are just a few things coach White said are things playing a role in the team’s lack of consistency shooting the ball.

He also talked about what he wants to see from his team against St. Joseph’s.

“Biggest thing you hope to see versus St. Joe’s is maintained defensive and rebounding intensity and accountability, continue to grow in those two areas,” White said.

One of the most valuable things that come from tournaments is minutes. The Gators play three games in four days, which is plenty of time for them to find their rhythm and confidence.

According to Florida guard Andrew Nembhard, that’s exactly what he expects to happen.

“I think it will give us some quick experience with three quick games. Give us a new look, a new kind of chance for guys to kind of play a lot of games quickly, so I think it’ll be good for us,” Nembhard said.

On Friday, Nov. 22. the Gators will take on either Miami or Missouri State and play either at noon or 2pm.

On Sunday, Nov. 24, Florida will take on either Buffalo, UConn, Towson or Xavier and time is to be announced.