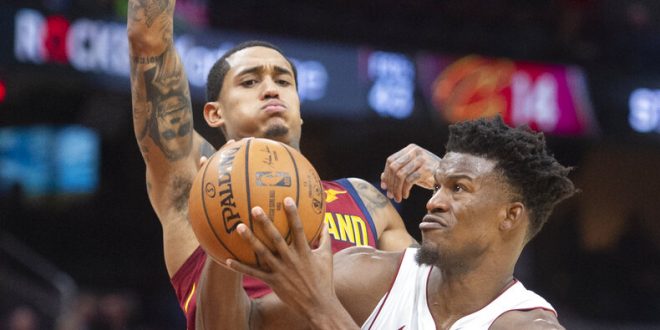 For those who haven’t been paying attention to the Miami Heat, it might be time to start.

After defeating the Cleveland Cavaliers by 24 last night, the Heat record moves to 10-3. This ties the best 13-game start to a season in team history. Miami’s lights-out shooting and strong team defense have led them to its current third-place standing in the Eastern Conference.

Last season, the Heat held a below-average offense by most statistical measures, finishing 26th in points and 22nd in shooting percentage. This was one of the reasons they pursued star Jimmy Butler so heavily. While he is Miami’s leading scorer so far, the team’s offensive turnaround has not sat squarely on Butler’s shoulders.

Miami is currently one of the best shooting teams in the NBA, with a league-leading 48.2 field goal percentage and the second-best three-point percentage in the league at 39.6.

Their hot hands were on full display last night when the team dropped 75 points in the first half against the Cavs. This is another historic feat, as it ties a franchise record for most points scored in a half.

A huge contributor to both the Heat’s efficient shooting on the season and the scoring outburst last night is wingman Duncan Robinson. The second-year 6’7 Michigan product finished the game with 29 points (a career-high) on 9-of-15 shooting. All nine shots were threes, including one from over 30 feet out just before halftime.

All of Duncan Robinson's 8 first half three pointers…7 in the second quarter..Crazy pic.twitter.com/7J2T0OOJxi

He scored seven of his nine threes in the second quarter, which is a new franchise record for most threes made by one player in any quarter or half. Robinson is hitting his shots at a 48 percent rate and leads the team in three-point percentage at 44 percent.

Robinson is just one of Miami’s young players to impress this season. Point guard Kendrick Nunn is a legitimate early Rookie of the Year candidate, and 2019 first-round draft pick Tyler Herro is averaging 14 points per game, which is the fourth-most on the team.

Defense is always an emphasis for coach Erik Spoelstra. The Heat have finished in the top 10 for defensive rating the last four years, and this season is no different.

Miami is currently third in defensive rating and surrenders the fourth-least points per game. The team also leads the league in steals. Butler alone is nabbing 2.7 steals per game, which leads the NBA.

I don't know what it says, but it says something when you get a steal on the first pass of the game. pic.twitter.com/ZPqhZiBPWS

The Heat used a zone defense more than any other team in the league last season, and they broke it out for the first time this year against the Lakers five games ago. It is unclear how much the team will utilize a zone, but evidently they are not afraid to try to change the tempo of the game.

I'm a senior journalism student at Florida. I love sports, and I love covering sports. I'm one of the beat writers for the Gator soccer team right now, and if you follow me on Twitter @johnmiceli13 you'll never miss a soccer update
Previous Game Preview: Gators Men’s Basketball Heads to Charleston Classic
Next Colts Head to Houston to Take On the Texans