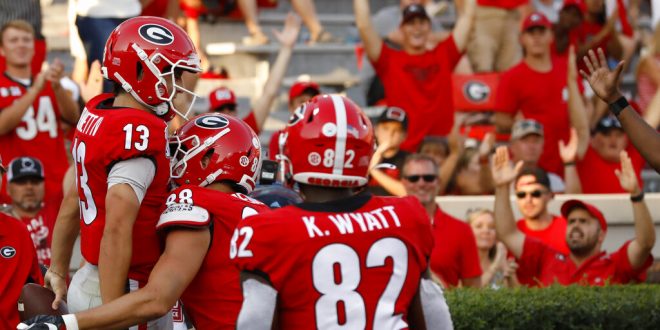 No. 4 ranked Georgia is set to face off against No. 24 ranked Texas A&M this Saturday at 3:30 in Athens.

This Georgia football defense is truly a force to be reckoned with. Aside from their 20-17 loss to South Carolina, the defense has yet to give up more than 17 points to any opponent, including ranked Florida, Auburn and Notre Dame teams. The Bulldog defense has been responsible for many of the big wins for Georgia this season. Most notable was last week’s vital win against Auburn.

In the fourth quarter of last week’s game, Georgia’s offense was unable to perform well, only earning two yards. Despite the fact that Auburn earned 158 yards, Georgia’s defense was able to stop the Tigers from scoring in their final two drives. This defensive performance preserved the 21-14 victory.

The Georgia defense is led by dominant players like linebacker Monty Rice and defensive back Richard LeCounte. Rice leads the team in tackles with 66 on the season while LeCounte leads the defense in interceptions with two. While it is important for the Georgia offense to perform this week, the defense needs to show up against a dominant Aggie offense.

Texas A&M has had a great offensive season despite their three losses. The offense is led by junior quarterback Kellen Mond. Mond has thrown for 2,435 yards, 18 touchdowns and six interceptions on the year with a completion percentage of 64.0.

The Aggies have lost three games this season. These losses have been at the hands of top ranked teams in Auburn, Clemson and Alabama. The Aggie offense still managed to score 20 or more points in the Auburn and Alabama losses. Heading into Athens against a No. 4 ranked Georgia team will be a challenge for the Aggies. The offense will need to be at the top of its game to be successful against a tough Georgia defense.

It is no question that this game has higher stakes for Georgia. Currently, the Bulldogs reside in the final spot vying for the College Football Playoffs. A loss would certainly knock them out of playoff positioning. Despite the outcome of this game though, Georgia will remain at the top of the SEC East.

For Texas A&M, this would be a chance to upset a top ranked team, something they have been unable to do this season. Heading into a game against No.1 ranked LSU, the Aggies could use the confidence boost from a win against Georgia.