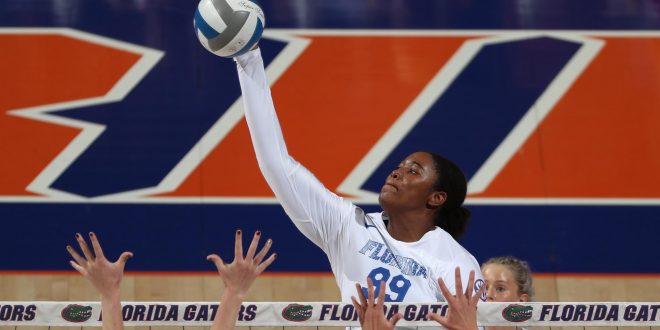 The No.15 Florida Gator volleyball team looks to host the Arkansas Razorbacks in their second meeting of the season Wednesday evening.

In their last match against the Razorbacks, the Gators swept Arkansas on the road.

The Gators (23-4) sit atop of the SEC with the Kentucky Wildcats (21-6). Both teams hold a (14-2) conference record with both of the Gators conference losses to the Wildcats.

With two conference matches left to end the season, the Gators look to stay atop the SEC in their matchup with Arkansas.

Florida Defense Against the Razorbacks

In the first meeting against the two teams, the Gators defense proved to be dominant at the net.

Florida combined for a total 13 blocks on the night. Right side hitter Holly Carlton recorded nine blocks against the Razorbacks.

Additionally, middle blocker Lauren Dooley had a career-high 12 blocks on the night. Furthermore, Dooley ranks fourth in the conference with a total of 94 blocks on the season.

Since the October meeting, the Gators defense has continued to be successful against SEC opponents.

Currently, the Gators rank first in the SEC in total blocks. Florida is averaging 2.55 blocks per set.

The Florida defense continues to put a damper on opposing hitters. Ranking second in the conference, the Gators average an opponent hitting percentage of .183.

In the last meeting with Arkansas, Florida held the Razorbacks to a hitting percentage of .097.

Another Look at Arkansas

The Razorbacks (11-17 overall, 5-11 SEC) are coming off of three straight wins over conference opponents.

The Arkansas offense is led by a pair of talented freshmen in outside hitters Maggie Cartwright and Jillian Gillen.

Furthermore, Gillen currently leads the Razorbacks with 380 kills on the season.

The freshman also earned SEC Freshman of the Week after the Razorback’s 3-2 match victory over Mississippi State.

In their last meeting with Florida, Cartwright led the Razorbacks with a total 12 kills and a service ace.

The opening serve for the Gators match against the Razorbacks is set for 5 p.m. on Wednesday.